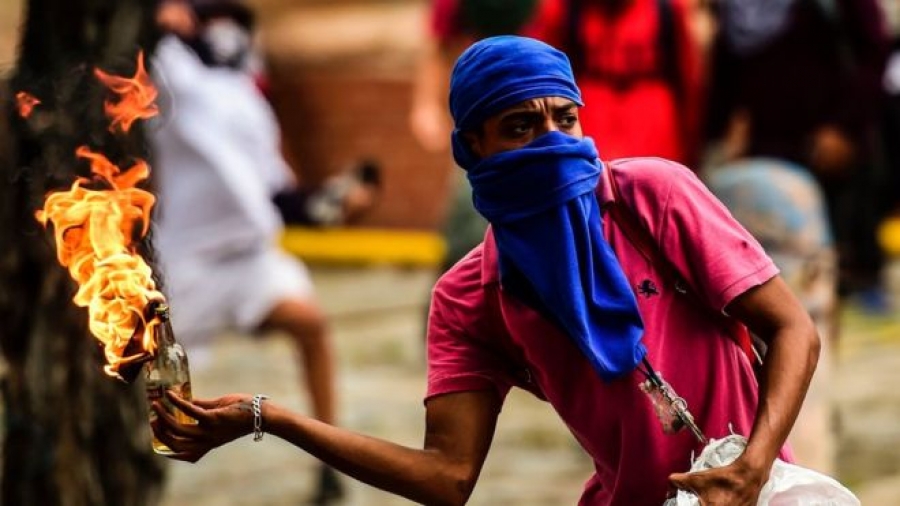 Millions of Venezuelans have joined a general strike called by the opposition as pressure mounts on President Nicolás Maduro to cancel elections for a new constituent assembly.

Clashes between police and protesters killed at least three people. More than 300 others were reportedly arrested.

said the strike was minimal and that its leaders would be arrested.

Since April, when opposition protests intensified, almost 100 people have died across the country.

Protesters barricaded roads in the capital, Caracas, and other cities with rubbish and furniture. The opposition said that 85% of the country joined the strike.

But in pro-government areas of the capital, life went on as usual, with shops open and streets busy. Public employees also appeared to have worked normally.

In several cities, police fired tear gas as they clashed with protesters. One death was reported on the outskirts of Caracas while two others died in the northern city of Valencia.

More than 360 people had been arrested across the country, a local rights group said.

Colombia, France, Spain, the US and the EU have urged the Venezuelan government to cancel the vote for a new constituent assembly on 30 July.

But Mr Maduro has rejected the calls.

In a speech on TV, he claimed "triumph", saying that key sectors had not joined the strike.

"Work has triumphed, love, life, and hope; work has triumphed. They [the Venezuelan opposition] who have never worked, let them carry on not working, we are moving forward, comrades."

"I've ordered the capture of all the fascist terrorists."

The assembly would have the power to rewrite the constitution and to bypass the opposition-controlled legislature.

Opposition politicians say Mr Maduro wants to use the assembly to entrench himself in power, while the president argues a new constitution will promote dialogue in the polarised country.

The opposition have ramped up their schedule of protests in the days leading up to the elections, including Thursday's general 24-hour strike and a mass demonstration on Saturday.

Meanwhile, Isaias Medina, a senior diplomat representing the country at the UN, resigned, saying he could no longer represent the government because of human rights abuses.

Venezuela's ambassador to the UN, Rafael Ramirez, said Mr Medina had acted "dishonestly" and been fired.

Earlier, the head of the Organisation of American States (OAS), Luis Almagro, warned of a "calamitous deterioration" of the situation, accusing Mr Maduro's government of having "blood on its hands".

"Behind every detainee, every political prisoner, every person tortured and every person killed there is someone that is institutionally responsible," Mr Almagro wrote in a report.

"The fear that is on everyone's mind, but we are too afraid to speak out loud, is our fear that this will escalate into a bloodbath."

Mr Almagro has long been one of the fiercest and most outspoken critics of the Venezuelan government.