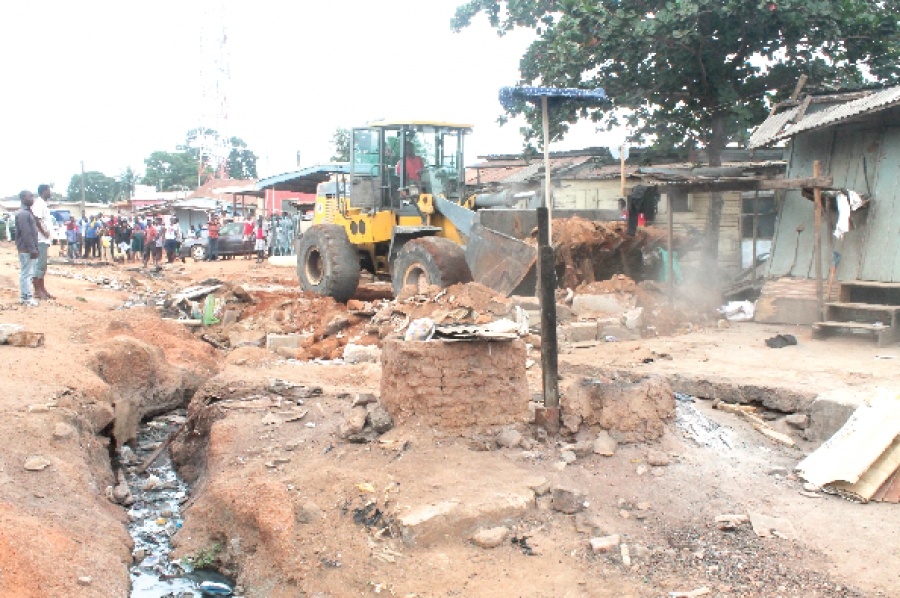 Dozens of structures on watercourses at Mataheko in the Ablekuma Sub-Metro of the Accra Metropolitan Assembly (AMA) have been demolished.

Portions of the walls of a building belonging to the Member of Parliament (MP) for Ablekuma Central, Mr Ebenezer Nartey, were also demolished.

The exercise was also to pave way for work to begin on the road linking Accra Academy, near Kaneshie, to the Mataheko main road.

According to officials of the sub-metro, those affected were served with three months’ notice of the demolition.

A building inspector and engineer at the AMA, Mr Evans Ofori Danquah, told the Daily Graphic that some of the structures were sitting on the road, with others on watercourses.

“The MP in the area initiated the process to create access from a part of the Accra Academy to join the main road and contacted the assembly for assistance. We consequently held a durbar for the residents after which we gave them notice, so most of them decided to bring down their structures themselves,” Mr Danquah said.

He stated that after the forum all the participants agreed with the decision to demolish structures.

One of the affected residents, Madam Margaret Setornu, who had built and lived in a structure for 25 years, however, expressed reservation about the exercise, saying that she was compelled to bring down her structure personally when she saw the task force approaching.

“Currently, I have nowhere to lay my head or money to build a new house. They told us that some of our buildings were on the road. Per their indication, my building was affected and I had to remove it myself,” Madam Setornu said with anxiety.

The Sub-Metro Director of the National Disaster Management Organisation (NADMO), Mr Frank M. Mayaya, gave an assurance that the exercise would curb the perennial flooding in the area, recounting the most severe ones in 2008 and 2009 which resulted in the loss of lives and property.

“This demolition exercise is a step in the right direction because it will help to improve the drainage system in the community,” Mr Mayaya stated.

He expressed the NADMO’s preparedness to work with the MP to support the victims without shelter.