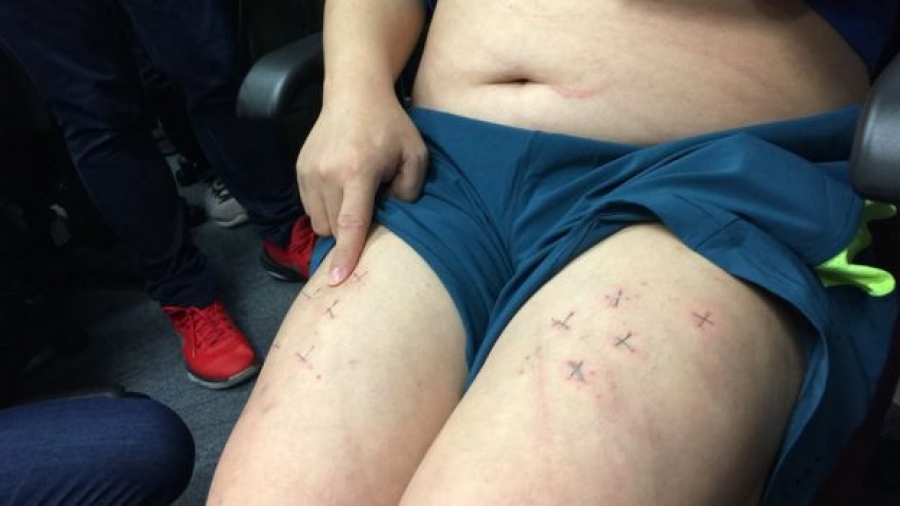 A veteran democracy activist in Hong Kong says he was kidnapped, beaten and tortured by agents of mainland China after trying to get in touch with Liu Xia, the widow of Nobel Peace Prize winner Liu Xiaobo.

The activist, Howard Lam, said on his Facebook page in late July that he had obtained a signed photo of the Barcelona football player Lionel Messi, and that he intended to send it to Ms Liu as a condolence gift.

Liu Xiaobo, who died from liver cancer in July, was a big fan of the football star.

Earlier this week, Mr Lam said he had received a phone call from an old acquaintance working for the Chinese security services who warned him to stay away from Ms Liu, who is believed to be under continued house arrest.

The activist said he was abducted on Thursday afternoon in the bustling neighbourhood of Mongkok by unknown men speaking Mandarin Chinese - spoken in the mainland but far less common in Cantonese-speaking Hong Kong.

"They gave me a warning," said Mr Lam. "They wanted to alert so many people that if you don't love China, your government, you may have the chance of something like this happening."

He said he had been rendered unconscious by a chemical applied to his nose and mouth. After he regained consciousness, he was being beaten around the torso and tortured with a stapler.

He said the men taunted him, saying they were making crosses with the metal staples because the activist was a Christian. Eventually, he fainted again.

When he came to shortly after midnight, he found himself on a beach in eastern Hong Kong and made his way to a taxi.

The first thing Mr Lam did on Friday morning was to give a news conference, before heading to hospital for treatment, where he was questioned by police officers.

When asked about the case, police commissioner Stephen Lo said the allegations were serious and that the investigation had begun.

Lee Cheuk-yan, a former lawmaker who took Mr Lam to hospital, told BBC News that this was a very strange case, with an unclear motive.

He admitted that he had no clear idea who "they" were, but suspected that whoever ordered the abduction was in mainland China.

Hong Kong media are already comparing this case to the mystery of the five Causeway Bay booksellers, one of whom was allegedly abducted from Hong Kong.

The case - and the equally mysterious disappearance of a Chinese tycoon - caused widespread concern about the rise of Chinese influence in Hong Kong.

Mainland agents are not allowed to operate in Hong Kong, which is a semi-autonomous territory responsible for its own law and order.