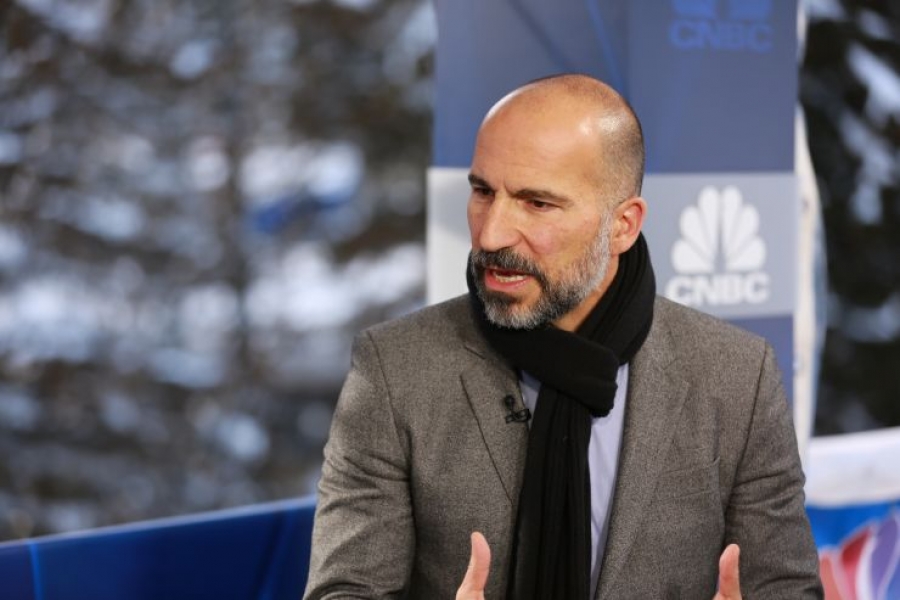 When Uber starts meeting investors this week for its upcoming IPO, the ride-hailing company is expected to compare itself to a business that it hardly resembles: Amazon.

The parallel, according to the NY Times, is based on the idea that Uber will eventually grow into an Amazon-like “platform” business, with ride sharing as the first step on its way to becoming a transportation behemoth. It’s a compelling narrative for Uber, because the knock on Amazon for years was that it couldn’t turn a profit. We now know it can — Amazon recorded net income of $3.6 billion in the latest quarter.

Uber burns cash today, as did Amazon when it went public in 1997. Both manage huge logistics operations behind the scenes that require hefty upfront spending. So shareholders just need to be patient for the long term and wait for those investment to pay off. That’s what Uber would say.

Silicon Valley companies love to invoke Amazon and Jeff Bezos. He’s the CEO who defied the odds and made Wall Street look silly for ever doubting his upstart could turn its massive investments into not one, but several dominant businesses on the way to becoming one of the world’s most valuable companies.

The problem for Uber is it just doesn’t have much in common with Amazon.

“The Amazon analogy has been carried too far and is being used as an excuse to justify high pricing for every money-losing, Silicon Valley venture,” said Aswath Damodaran, who teaches finance at New York University’s Stern School of Business.

Damodaran, who’s known as Wall Street’s “Dean of Valuation” for his work on the proper way to value companies, said the biggest difference between Amazon and others is its culture of consistency. From the very beginning, Amazon has made clear its focus on revenue and cash flow appreciation while reinforcing the idea of investing profits in long-term growth.

In fact, Amazon’s revenue growth has dipped below 20% only twice since its founding, even as it surpassed $230 billion in sales last year. And despite all the investments the company has made, Amazon generated positive cash flow in all but three years since going public.

On top of that, the leadership team has remained stable, telling a familiar story “that does not waver, even in the face of adversity,” Damodaran said. Uber, by contrast, has been plagued by management upheaval, leading most notably to the ouster in 2017 of co-founder and CEO Travis Kalanick.

“That is not something that you can acquire, but has to come from deep in the organizational culture,” Damodaran said. “I firmly believe that Amazon is one of a kind.”

Damodaran previously told CNBC that Uber should be valued at around $60 billion, much lower than the $80 billion to $90 billion range suggested by its updated IPO filing last week. Damodran said that Uber’s lack of a “viable business model” to reach profitability is “scary.”

In its filing, Uber showed an operating loss of $3 billion on $11.3 billion of revenue in 2018. It had negative free cash flow of $2.1 billion and warned that it may not achieve profitability in the foreseeable future, as it continues to invest in its business.

That’s a much bigger loss than what Amazon has reported throughout its history. Amazon has never reported an annual loss bigger than $1.5 billion. It first became profitable in 2003, nine years after its founding, and has lost money only twice since then. In 2011, when Amazon’s market cap was similar to Uber’s current valuation, it even eked out a small profit.

Amazon’s cumulative losses were tiny compared to today’s cash-burning companies. Through its first nine fiscal years, Amazon lost a little over $3 billion in total, before turning the corner to profitability. Uber, which is about 10 years old, and Lyft, which is a few years younger, have cumulative losses of $7.9 billion and $3.6 billion, respectively, and neither is close to cash flow positive.

“If these companies were on the cusp of profitability now in 2019, I would draw a comparison to Amazon,” said Kevin Boeh, an accounting professor at the University of Washington.

But they’re not, and he doesn’t.

The competitive landscape is also very different. When Amazon first came on to the scene, most of the incumbent bookstores, like Borders and Barnes and Noble, weren’t even in e-commerce, leaving the playing field wide open. Amazon started building out its cloud-computing service, which it launched in 2006, years before Microsoft and Google had offerings. That business ultimately gave Amazon fat technology margins to blend in with its low-margin retail division.

Uber and Lyft, however, already have to go up against each other in the U.S. as well as a host of rivals in various markets around the globe. Uber’s food delivery and freight forwarding services also face big competitors in mature markets, and the company is just one of many pursuing self-driving technology.

“Amazon certainly had this competitive advantage,” said Mukesh Patel, who teaches business at Rutgers University. “That difference could be meaningful.”

Perhaps no data point is more illustrative of the difference between the two companies than the amount of capital coming from their IPOs. In 1997, Amazon raised $54 million at a valuation of $438 million. Uber plans to raise about $10 billion.