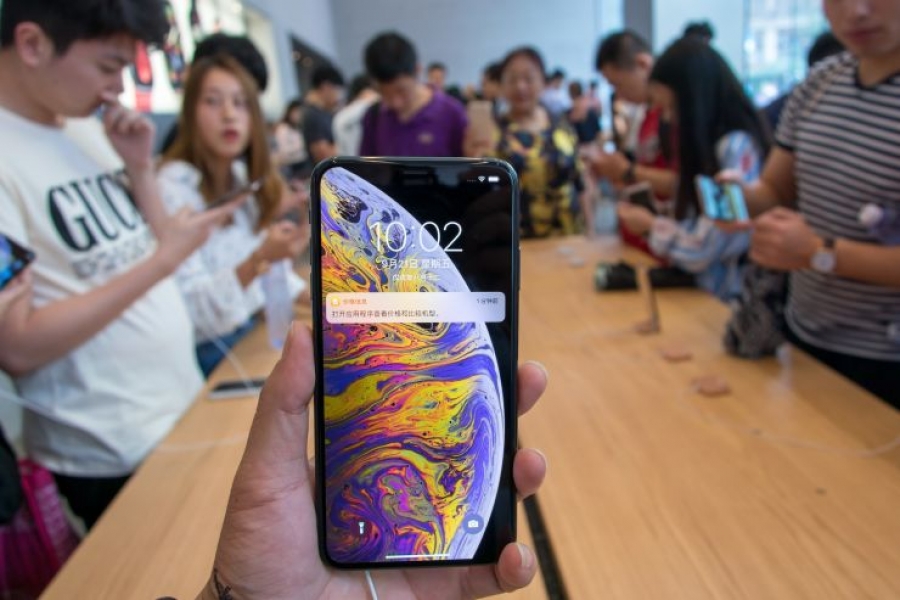 That comes as the top-of-the-line Apple smartphones have posted poor China sales on what experts say are too-high prices for the world’s largest smartphone market and a lack of innovative features compared to local competitors like Huawei. The technology giant itself acknowledged earlier this month that unexpectedly low sales in the Chinese market would likely lead to worse-than-anticipated first quarter revenues.

Other third-party sellers on the site had the devices for even cheaper, offering flash sales to try to unload iPhones. One seller had a 256GB version of the iPhone XS Max, Apple’s most premium device, for 9,699 yuan ($1,436), way below the U.S. firm’s official selling price of 10,999 yuan ($1,628) for that smartphone.

Still, that remains more expensive than in the U.S., where the same phone would sell for $1,249, according to the Apple website.

And that’s just on one site. Other retailers in China are also putting their iPhones on sale. Sunion, an Apple re-seller, was advertising 700 yuan off for both the 128GB and 256GB versions of the iPhone XR. E-commerce site Pinduoduo, which allows third-parties to sell products, also had hefty discounts across all of the latest iPhone models.

Apple’s issues in China are down to two major factors, experts and local consumers say: It got its pricing wrong, and it has failed to introduce features to excite consumers in a forward-thinking technology market. Now, analysts said, competitors have taken market share in the premium smartphone space.

A matter of price

In a public letter released on Jan. 2, Apple CEO Tim Cook blamed the slowing Chinese economy and rising trade tensions with the U.S. as one of the key reasons for lowering first quarter sales guidance. Experts, however, told CNBC that much of the iPhone’s China problem comes down to the company setting the wrong prices.

For example, Apple’s 512GB iPhone XS Max, the most expensive of the new models, costs $1,499 in the U.S. But in Asia’s largest economy, the un-discounted price is 12,799 yuan, or nearly $1,900 — a more than 26 percent premium. Other variations of the latest iPhone models have similar price premiums in China.

Of note, the XR was meant to be the cheapest of the new models, but it has proven to be too pricey for many Chinese consumers — who were asked to pay a 28 percent premium compared to American buyers.

“The trade war is background noise and more of a scapegoat excuse with the real issues being iPhone XR demand and a mispriced product in a competitive Chinese market,” Daniel Ives, managing director of equity research at Wedbush Securities, told CNBC by email.

“It’s time for Cook and Apple to look in the mirror, take their medicine around pricing and execution and move forward with the biggest installed base in the world to turn this ship around from this dark chapter in Cupertino,” he added.

Apple has given no indication about whether it will cut prices in its official stores in China. The company did not immediately reply to a CNBC request for comment sent on Friday.

Across China, Apple is offering a deal where it will sell the iPhone XR for 4,399 yuan ($651) if a customer trades in an iPhone 7 Plus, a two-year-old handset. That’s a bid to get users to upgrade, but not all iPhone owners in China are keen on purchasing a newer device.

Karen Xiao, an iPhone 7 user living in Guangzhou, said the prices of the new iPhones are too high and her current model still works fine.

“For me, the function is good enough. For me, using the internet and just phones — I don’t play games. So the function can satisfy my needs,” Xiao told CNBC, adding that newer models don’t offer “major differences” that appeal to her.

Despite the negative international headlines that have hit Huawei over the past few months, its consumer business continues to thrive. The Chinese technology giant replaced Apple as the second-largest smartphone player by global market share last year. It’s firmly the biggest vendor in China.

Chinese consumers say they’ve been attracted to Huawei’s newest features, the price points and the fact that it’s a domestic brand.

he added that Huawei phones are “cost-effective” and have good features while iPhones are “more of trend.”

One of the key features that Huawei introduced was a triple-lens camera on its P20 Pro, which was launched last year.

“For the next 12 months, the iPhone lacks one of the most appealing features of current winners in the Chinese smartphone market, the triple lens camera. The Huawei P20 Pro led the march and other Chinese manufacturers are all scrambling to follow suit as it has been so popular,” Neil Campling, head of technology, media, and telecommunications research at Mirabaud Securities, told CNBC by email.

Chinese smartphone users are already thinking about the future of their devices. While major manufacturers like Huawei and Samsung are releasing foldable phones and quad-camera handsets, devices that support 5G — the next generation of mobile connectivity — could be the next big feature consumers are looking for.

The tech promises super-fast internet speeds and Samsung and Huawei both plan to release smartphones next year that will be compatible with it. Major telecommunications providers in China, including China Mobile and China Telecom, plan to begin rolling out 5G in 2019.

Apple, however, is unlikely to release a 5G-capable phone until 2020 at the earliest, according to a report from Bloomberg in December.

For Gallon Zhang, a Guangzhou-based iPhone XS Max user, that could be a deal breaker. He said he’s used iPhones for several years, but would consider switching to Huawei if Apple didn’t bring out a 5G version soon.

“Currently, China is updating internet to 5G, so I probably would buy a 5G iPhone since I need fast speed. I know currently Apple said that they didn’t want to upgrade to 5G phones yet, so you will buy Huawei instead if they come first with the 5G phone because I know they will have a new one,” Zhang told CNBC.

That might spell more trouble for Apple in the next couple of years as it looks to steady the ship in China amid increasing pressure from the local competitors.

“Apple will also be left behind on (the) 5G tech integration curve as Chinese brands will be at least (a) couple of years ahead,” Neil Shah, a research director at Counterpoint Research, told CNBC.