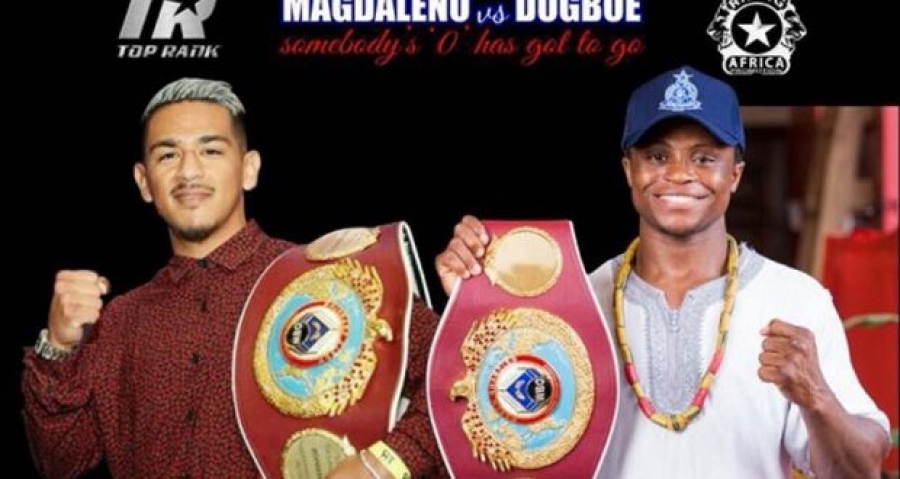 They may have sparred once as friends in the past but there is no love lost between Jessie Magdaleno and Isaac “The Royal Storm” Dogboe, as their impending bout to determine the undisputed champion of the WBO World Super

It will be recalled that Dogboe (18-0-0) called out Magdaleno (25-0-0) shortly after dispatching Mexican Cesar Juarez by TKO for the interim WBO World Super Bantamweight title last January in Accra.

“Jessie Magdelano I’m coming for you baby. I know you are going to run but guess what the lion is here,” Dogboe taunted.

The American did not respond to that jibe but has suddenly found his voice and is coming directly for Dogboe’s head literally.

Magdaleno, 26, fired a salvo on Instagram with a picture of him mopping Dogboe’s decapitated head from a boxing ring with a mop.

A caption accompanying the photograph said: Hey @isaacbraveson hurry up and sign the damn contract and let’s get this fight going so I can mop you out this division!!.

The Royal Storm fired back poking at Magdaleno’s blonde hair by describing him as a “Becky with the good hair”.

Magdaleno later shared another edited picture of Dogbe shedding tears and urged his followers to supply captions for the chance to win autographed boxing gloves.

At this point, Dogboe, 23, got on Facebook and reminded Magdaleno of their sparring session in the past which he said had to be halted earlier than the intended 10 rounds because Magdaleno could not stand him.

He posted: “YOU DON’T WANT TO GET ME ANGRY Jessie Magdaleno *Keep Chatting Bare* It’ll encourage me to want to Knock YOU OUT, b. Hope you remember when we sparred in Vegas your corner stopped the sparring in the 5th Round whilst we were supposed to go for 10 … I was ONLY 4-0 back then Amigo…Guess what, Pretty Guy…

“TREAD VERY CAREFULLY With your MEMES and your words, Amigo.

“You’re a great guy but careful now, you’re entering into a Different Territory… Your Management can’t Save you…” Dogboe warned.