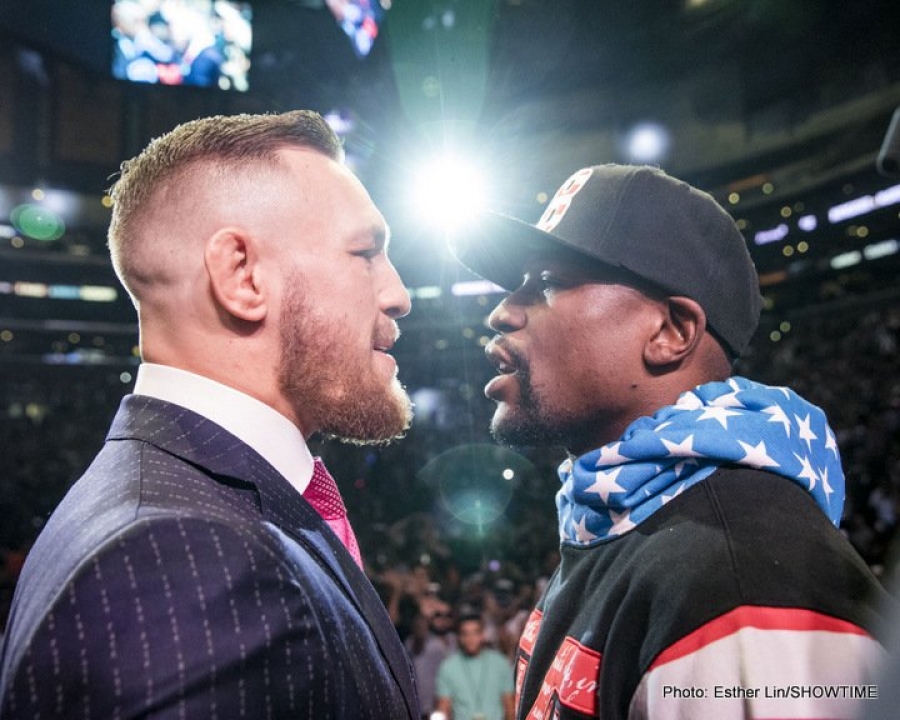 Conor McGregor says he’s trained hard to adapt from the 5 round UFC fights to be ready to fight Floyd Mayweather Jr. for 12 hard rounds on August 26. McGregor says Mayweather is hoping that he’ll wear down in the fight as the rounds go by, but he doesn’t plan on letting that happen.

McGregor, 29, it’s going to be the 40-year-old Mayweather (49-0, 26 KOs) who winds up fatiguing from the fast pace that he’s going to be setting for him in their fight on Showtime pay-per-view at the T-Mobile Arena in Las Vegas, Nevada.

The 8oz gloves that both fighters will be wearing for the fight will favor McGregor, who is the naturally bigger puncher than Mayweather. The odds for the Mayweather-McGregor fight have narrowed due to the smaller gloves size. Mayweather is favored by the odds -550, and McGregor +425.

McGregor isn’t just talking about wanting to fight at a fast pace against Mayweather. He actually means what he says. If you saw the sparring video of McGregor and Paulie Malignaggi, you’ll have noticed that McGregor was all over Malignaggi, not giving him a second to rest and hitting him constantly with punches. There was virtually no letup from McGregor, even when he was on the inside. McGregor continued to hammer away at Malignaggi with short punches o the head that made him not want to hold. Mayweather is 40, and he’s no used to fighting without holding and resting with his back against the ropes. If Mayweather fights like that against McGregor, it could be his undoing.

”Floyd is praying for me to fatigue in there, but I will not fatigue. I will continue to press forward, and I will break him. At 40 years of age, he will not sustain my pace,”said McGregor to ‘Conan on TBS.’ “We’ve made slight adjustments in my cardio preparation. It’s actually been very enjoyable to go from five, five-minute rounds, which is what we’re used to, which is 25 minutes, to 12, three-minute rounds of boxing, which is 36 minutes. Slight adjustments, but we are more than ready. I done 12 rounds last night, I’ve done multiple 12-round fights in the gym in the lead-up to this. We are more than ready,” said McGregor.

READ  Mayweather vs. McGregor: Somebody's '0' Has Got To Go

A fast pace fight favors McGregor, because he’s the younger guy and the more active of the two. McGregor’s fights in the octagon are generally always fast pace affairs with a lot of fireworks. In contrast, Mayweather has fought a lot of slow paced fights in recent years against Manny Pacquiao, Andre Berto and Marcos Maidana. Even Mayweather’s fight against Saul Canelo Alvarez in 2013 was a slow-paced fight. Canelo stayed on the outside and boxed Mayweather, and let him fight at a slow pace. It was a mistake on Canelo’s part and it cost him the fight.

It would be a sad ending to Mayweather’s long boxing career if he were to get knocked out by the heavy underdog McGregor. Mayweather has won so many fights during his career and looked invincible most of the time. That’s what happens with old fighters that stay out of the ring for 2 or more years. When they come back, they frequently get beaten badly by younger fighters. We saw that with Sugar Ray Leonard in his loss to Hector Camacho. Leonard tried to come back 1 time too many, and it cost him dearly in losing by a knockout.

Mayweather hasn’t looked that great in the ring for some time. He took a lot of rounds off against Andre Berto, Manny Pacquiao and Marcos Maidana. Mayweather doesn’t seem capable of fighting hard for a full 12 rounds. He fights hard for 6 rounds, and wins because his opponents are so bad. McGregor will have a chance of outworking and maybe even stopping Mayweather if he doesn’t want to fight hard in this fight.

I don’t think you can take what Mayweather says anymore at face value. He says he’s going to do something, but then he does the opposite. Mayweather is saying he’s going to take the fight to McGreor and knock him out. Are we to believe Mayweather this time or should we ignore what he’s saying and judge him by his actions in his past fights? In regular life, we judge the people we associate with on their behavior and actions that they’ve shown in the past.

If a person doesn’t keep their word, then we stop listening to what they say when they’re talking about doing something that is important. Mayweather is saying he’s going to go directly at McGregor and knock him out so that he can repay the boxing fans for his lackluster fight against Pacquiao in 2015. Are we to believe Mayweather or judge him by what he’s done in the past?

McGregor will come at Mayweather on August 26 and look to knock him out. We know this because that’s how McGregor always fights in the octagon. He goes after his opponents, and he doesn’t play it safe no matter which it is he’s fighting. McGregor feels really confident in fighting with the 8oz gloves. He thinks he’ll hurt Mayweather and knock him out quickly with those gloves. It would be the biggest upset boxing has seen in quite some time. A fighter with a 0-0 record beating Mayweather, who rates himself as a better fighter than Sugar Ray Robinson.