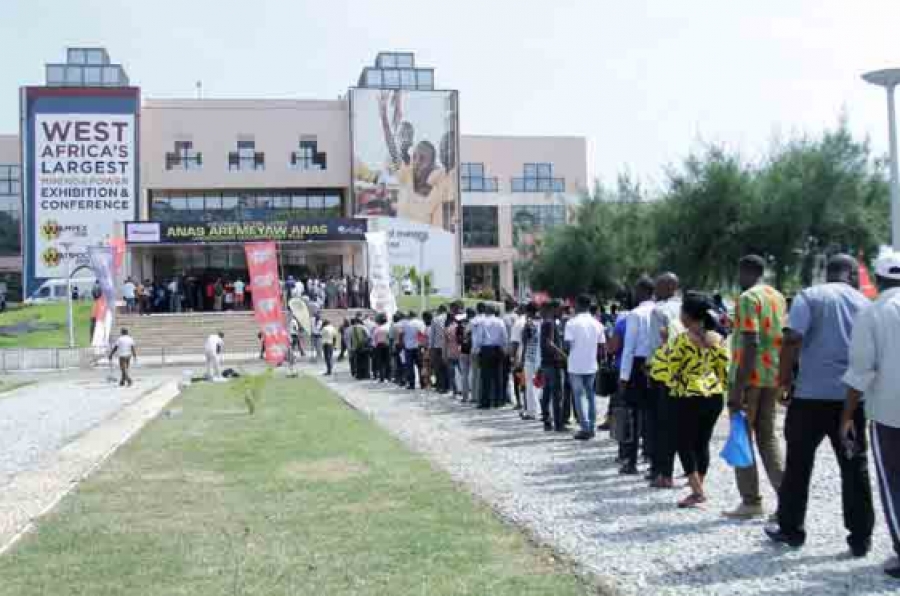 About 12,000 Ghanaians from all walks of life are estimated to have already watched Anas’s latest trending exposé on corruption in Ghana’s football administration titled; “When misconduct and greed become the norm.”

Residents in Accra who were the first to watch the first premiering last Wednesday and Thursday trooped to the venue in their numbers on both days hours before the time advertised for the shows.

According to information from Tiger Eye PI, the undercover investigators of the now infamous documentary on the rot in Ghana football, 1,500 tickets were issued for each of the eight shows, all of which were suscribed.

Although the tickets were for specific times that the documentary would air, which were 3pm, 5pm, 8pm and 10pm each day, events at the venue showed that patrons did not pay particular attention to the time on the tickets and decided to choose the time that best suited them.

Further, security details that inspected the tickets of the expectant patrons either decided not to turn anyone away or were oblivious to the fact that all the tickets had times they could be used on them.

It was, therefore, not strange that people remained outside when the documentary got underway in the auditorium because there was no longer space to accommodate people.

People in the crowd outside the entrance also pressed against one another, especially from the back as they were eager to get in, which would have resulted in a stampede had it not been for the vigilance of the security personnel who were on hand.

Narrating their experiences in the thick and sometimes disorderly queue, some patrons said they had to leave the queue and refrain from watching the documentary because they were suffocating and could not take it any longer.

Others said at a point, crowd control at the entrance was so bad that it took a very long while for sanity to prevail.

Soldiers in charge the entrance of the auditorium,insisted that all three queues formed should be merged into one but no one was ready to go back, hence the stalemate which took some time to resolve.

But the crowd outside notwithstanding, the documentary had already begun, albeit later than the 8pm advertised last Thursday when some patrons entered the main hall.

As a resolt of the late start of the third screening, the last for the day scheduled at 10pm also began late and so finished showing after midnight.

Once inside the auditorium, patrons stayed glued to the screen in order not to miss any part of the exposé. They could not hide their excitement as they expressed shock at what they viewed, bringing out shouts of ‘eii, ooh, aah’, few cheers and jeers depending on what they viewed and other expressions of consternation and bewilderment till the end of the two-hour film.

Patrons were especially astonished that women referees were also involved in bribe taking to influence matches just like the men as the investigative piece showed.

They were also surprised seeing certain influential people in Ghana’s sporting circles taking bribes, either to influence matches or player or referee selections.

People who watched Anas’s Number 12 exposé also began hot debates on what they had seen right from the venue to their homes.

While some believed that the documentary had vindicated their long-held notion of corruption and underhand dealings in Ghana football, others questioned the modus operandi of the investigators and the source of the money used to compromise the officials. Some others were too astounded to utter a word – they just shook their heads in disbelief at what they had watched.