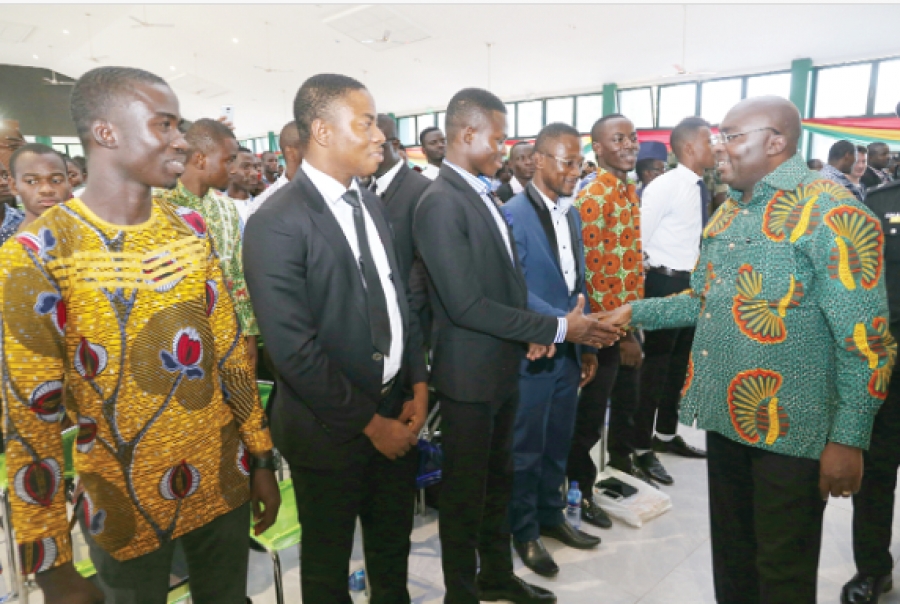 The government is putting in place measures to drive domestic revenue mobilisation to push the Ghana Beyond Aid agenda, the Vice-President, Dr Mahamudu Bawumia, has stated.

Those measures, he explained, would broaden the tax base and reduce the tax burden on the estimated 1.2 million Ghanaian taxpayers supporting the entire population of about 27 million.

Addressing a conference on “Moving beyond aid — Revenue mobilisation” in Accra on Wednesday, the Vice-President reiterated the government’s commitment to develop the country using domestic revenue and ingenuity.

The two-day conference, which has attracted representatives from countries which had signed onto the G20 Compact With Africa (CWA), including Benin, Ethiopia, Guinea, Morocco, Togo, Tunisia, Cote d’Ivoire, Egypt, Rwanda and Senegal, is being organised by the Africa Centre for Economic Transformation, with support from the Ministry of Finance and the International Monetary Fund (IMF).

“Judging from our history and our vision for the future, there is no doubt that we need to rethink how we develop as a country. It has become obvious that we need to be more efficient and effective in managing our resources to ensure rapid economic growth and transformation,” the Vice-President said.

Dr Bawumia said President Akufo-Addo’s vision of moving Ghana Beyond Aid was not a mere rhetoric but a reflection of the reality, as donor fatigue was growing less.

“Going beyond aid is an inevitable conversation and we can choose to confront it now or postpone it, to our peril,” he stressed, adding that one of the key pillars of the vision of moving Ghana Beyond Aid was to enhance domestic revenue, while pursuing a more transparent, prudent and accountable use and management of public resources.

“Let me assure you that we are committed to implementing policies and operational steps that will put us on a sound footing to mobilise the required revenue for sustainable development,” he added.

Dr Bawumia said the government was pursuing the Ghana Beyond Aid agenda on five pillars, saying the first was to enhance domestic revenue mobilisation, which would be done in a manner that would not undermine productive activities or distort private incentives for work.

He said encouraging higher private savings as a source of loanable funds to support the domestic credit and capital market and also expand financial inclusion was the second pillar.

For the third pillar, the Vice-President emphasised the need to pursue a more transparent, prudent and accountable use and management of public resources, while the fourth would be to leverage the country’s resources that were buried deep in the ground in more innovative ways than the conventional model of royalty and tax regimes.

He said the fifth was the “adoption of innovative mobilisation strategies, as well as the use of external resources in the emerging development finance landscape”.

He, therefore, urged the participants to come up with new ideas and better ways of improving revenue collection.

The Finance Minister, Mr Ken Ofori-Atta, gave an assurance that the government would not introduce more taxes that would burden the citizenry.

He said although the government required money through taxes to actualise its Ghana Beyond Aid agenda, it had resolved to “tax smarter and not harder”.

“And to achieve this goal, it must endeavour to expand its tax base,” he said.

“For instance, although estimates point to the existence of about six million potential individual taxpayers in Ghana, only about 1.5 million are formally registered with the Ghana Revenue Authority (GRA).

“Of this number 1.36 million are employees, implying that most self-employed individuals are not registered with the authority,” he said.

That, Mr Ofori-Atta said, underscored the need for the government to support the GRA to broaden the tax net to bring on board the tax paying bracket the millions of Ghanaians who were currently not paying taxes.

He said increasing fiscal pressures had become the new challenge facing many governments around the world, especially those in developing countries.

“Let me paint a stark picture of a new reality facing these countries, which is that there is the need to transition to a new normal in fiscal management where domestic revenue mobilisation and not international aid is the anchor of prudent and sustainable macro-fiscal management,” he said.

That, he explained, informed government’s decision to “set an ambitious economic policy goal of transforming Ghana’s economy by moving it from taxation to production”.

He said such a transition would result in more revenue being collected and, therefore, more funds becoming available to finance development.

On illicit flows, Mr Ofori-Atta said a study by Global Financial Integrity (GFI) estimated that between 1960 and 2012, Ghana lost about US$40 billion through trade mis-invoicing.