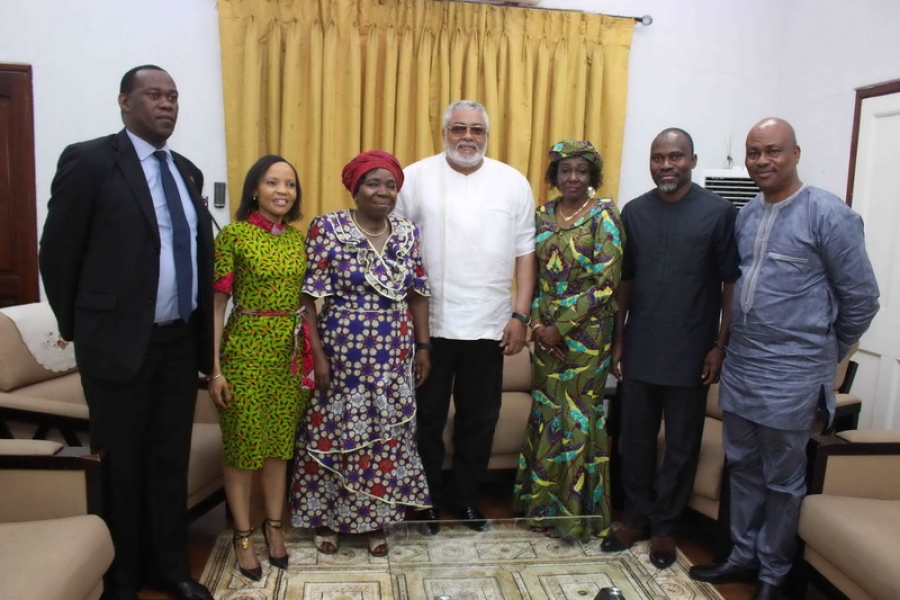 Dr. Dhlamini-Zuma and the Rawlingses discussed the breakdown of cultural values on the continent with the former President expressing his disappointment with the violent attacks on black foreigners in South Africa.

Former President Rawlings who spoke on the forthcoming leadership battle within the ruling African National Congress (ANC) in South Africa, said: “A change for the better is what most South Africans would like to see. This is the promise and expectation of most elections anyway.”

Mr. Rawlings said: “Irrespective of who emerges as head of government in the next election let us hope everything possible will be done to contain the cold-blooded manner in which non-South African citizens or blacks are subjected to the violence of the machetes, hacking and burning of people.”

Nana Konadu on her part urged South Africa to place premium on restoring traditional values of respect and reverence for the elderly by the youth. She said it was a trait she had observed and stated that because of the country’s unique status on the continent the breakdown of certain basic values has an impact on the rest of the continent.

While conceding the breakdown of cultural values, Madam Dhlamini-Zuma who is a major contender for the ANC leadership and by extension the South African presidency, stated that apartheid and the fight against it distorted cultural values. She said while a lot of effort had been made to confront the problem a lot more social intervention was required to restore the socio-cultural backbone of her country.

Madam Dhlamini-Zuma who is in Ghana on a private visit served as South Africa’s Minister of Health and Foreign Affairs under Presidents Mbeki and Motlanthe and Minister for Home Affairs under her ex-husband Jacob Zuma. She was elected Chairperson of the African Union Commission in July 2012 and left office in January 2017.