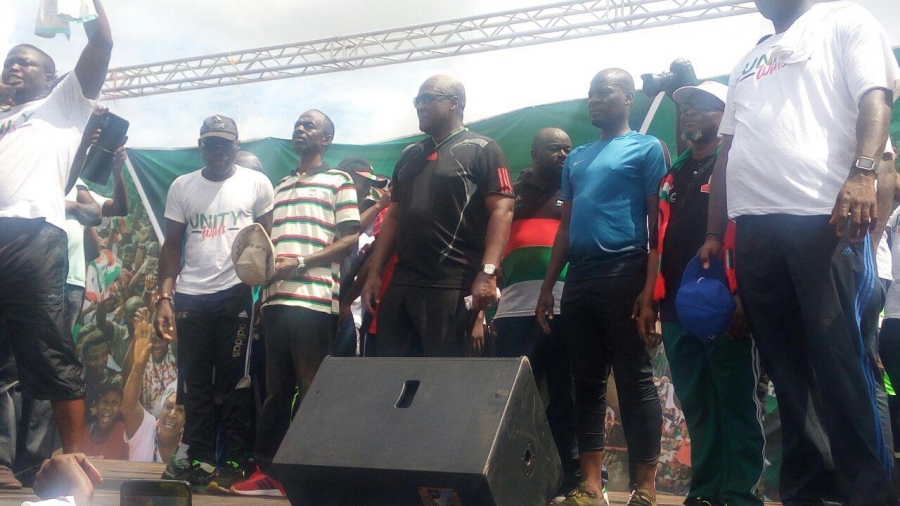 Former President John Dramani Mahama has stated that the defeat of the National Democratic Congress (NDC) in the 2016 general elections was good for Ghanaians to appreciate the good works of the party when it was in power.

According to the former President, it was God who made the NDC to step aside for Ghanaians to know who was being truthful and sincere to them based on the current happenings in the country.

“If the NDC had won the 2016 general elections, Ghanaians would have said if it was Akufo-Addo who had won the elections there would have been reduction in fuel prices, electricity tariffs, general improvement in the economy and jobs for the youth but now what are we seeing so it was good for the NDC to be out of power for Ghanaians to know who was truthful and sincere to them”, he stated.

Former President Mahama was addressing thousands of NDC supporters from the Tamale Central, Tamale South, Tamale North and the Sagnarigu constituencies in the Northern Region who had converged on the KuliKuli school park in Tamale after a unity walk organised by the party through some principal streets in the Tamale metropolis on Saturday.

The Unity Walk was to kick start the national unity and reorganization process of the NDC to get the party in readiness for the 2020 general elections and it would take place in all the other regions in the country beginning from Tamale, the Northern Regional capital.  It is being spearheaded by Mr. Kojo Bonsu the former Metropolitan Chief Executive (MCE) for Kumasi (KMA) and Mr. Joshua Akamba, two stalwarts of the NDC.

He stated that it was time for all supporters of the NDC to bury their differences after the party’s defeat in the 2016 election and come together as one family and plan ahead for the 2020 general elections.

Former President Mahama said this was the time for all party faithful to come together to build the NDC into a formidable opposition party  to put the government on its toes for the benefit of all Ghanaians.

He stated that two things that must engaged the attention of the party for now was the need for us to reorganize, re-strategies, and analysis for the 2020 general elections.

He commended the minority group in parliament for their hard work so far, saying that even though they are few they have been able to put the government on its toes and urged them to continue for the good of all Ghanaians.

The General Secretary of the Party, Mr. Johnson Asiedu Nketia reiterated that the focus of the party now was to unite for reorganization of the party and it is not about who is  going to be the Presidential candidate of the party for the 2020 elections.

He urged all party supporters to close their ranks and work together to get the party into a formidable election machine.

Mr.  Nketia stated that when the NDC was criticizing the NPP government over its performance for the 110days in office, the Vice President, Dr. Mahamadu Bawumia was saying that six months in office was not enough to access a government “so now was it logic for the NPP to come and tout about its achievements within the 110days” he questioned.

He therefore urged Dr. Bawumia to come to the party school establish by the NDC to learn logic.

The Minority Leader and Member of Parliament (MP) for Tamale South, Mr. Haruna Iddrisu reiterated the position of the minority on the free Senior High School (SHS) education policy by the NPP government, saying the minority would not allow the NPP to toy with the lives of Ghanaian children with its experimental policy on second cycle education in the country which was not sustainable and it was going to destroy the future of the country.