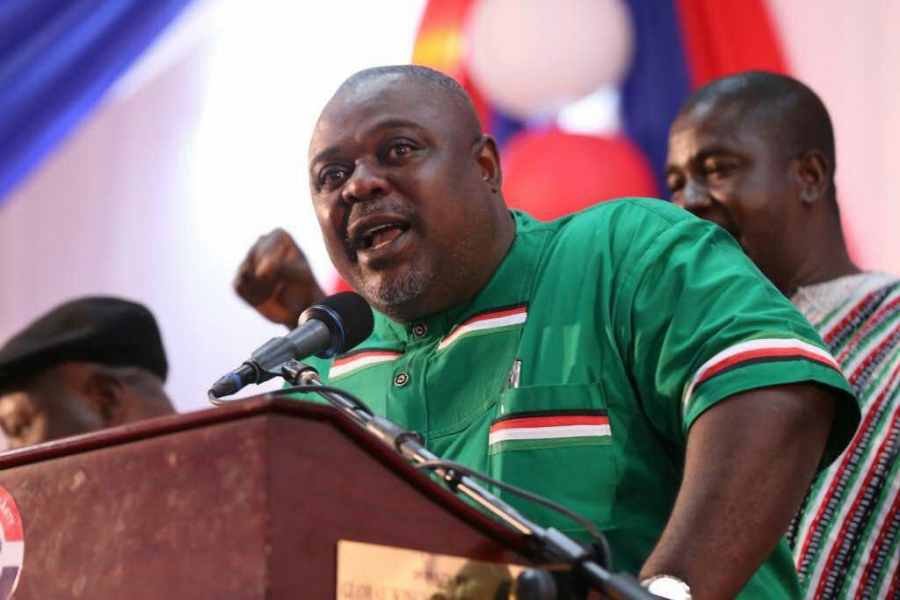 The county’s burgeoning democracy was last Saturday given a boost when various political parties thronged the New Examination Centre (NEC), the venue for the National Annual Delegates Conference of the New Patriotic Party (NPP), to support the party with solidarity messages.

People’s Party (PPP) was the need for a collective responsibility towards advancing the gains made in building the nation’s democracy.

The occasion was not without humour when the Deputy General Secretary of the NDC, Mr Koku Anyidoho, mounted the podium to deliver the fraternity message on behalf of his party.

He began by singing the victory song of the party, The victory of the NDC is coming again, and the people say, ehe dzor bordoor. The packed hall spontaneously rose on their feet and responded “Away! Away! Away!” After a few minutes of that humour, the house was called to order and business proceeded.

He summed it thus: “The fact that the NPP can invite the NDC and other political parties to its congresses, and the fact that the NDC and other political parties do same, is an ample testimony of how far Ghana has walked up the positive paths of our Fourth Republic democratic dispensation, and we must be proud of our collective resolve to live in peace and harmony.”

He said the year 2016 came with its high tensioned moments because it was an election year, adding that various political parties “plunged into the campaign with a determined will to win the mandate of majority of Ghanaians to have the opportunity to give meaning to their manifesto pledges.”

“The NPP won; we once again say Ayekoo for being declared winners. President Akufo-Addo, Ayekoo! Vice-President Bawumia, Ayekoo,” he stressed.

Mr Anyidoho said on January 7, 2017, a peaceful and fast-developing country was handed over to the NPP and underscored the need for the NPP to “give us more peace and development.”

He stated that the sweet campaign talk was over, adding that it was time for the government to sit down and fulfil its numerous promises to the people.

“Ultimately, as the governing party, we demand that you give us our peace. We shall not compromise on our peace. Give us or we shall demand it,” he said.

He said the NDC would not sit unconcerned and allow the Delta Forces and Invincible Forces to hold the country to ransom as it continued to call on the law enforcement agencies to apply the rules of the State without fear or favour, stressing “lawlessness shall not be allowed to run riot and ruin Ghana.”

According to the National Secretary of the PPP, Mr Murtala Mohammed, the NPP must enhance nation building and keep to its manifesto promises adding that “those who voted for you will ask questions.”

He called on the NPP government to commit itself to ensuring that corruption scandals were dealt with, as promised in the run-up to the 2016 election.

He said the PPP agreed in principle to the idea of having an institution that tackles public sector corruption, and hence must be established soon.

“We were happy to hear that in your quest to fight corruption, you’ll no longer declare a zero tolerance for it but you’ll set up a Special Prosecutor’s office. We were happy because we said that separating the Attorney General’s Department from the Ministry of Justice was the way to go. But the intention was to fight corruption and so in the same spirit if your Special Prosecutor’s Office will deal with corruption we are happy.”

“And so we want to remind you that it is important for nation building for us to keep to our promise. And so the people who voted you into power are watching,” he said.

The ruling New Patriotic Party’s 2017 Annual National Delegates Conference took place at the New Examination Centre of the University of Cape Coast, attended by over 5,000 delegates drawn across the country.

In its message, the NDP said the government should endeavour to loosen what he described as “Skin-tight economy,” stressing, the “NPP can count on the support of the NDP in its effort to loosen the skin-tight economy.”

From the NDPs perspective, it trusted that President Akufo-Addo would do a tremendous work at expanding what it described as a ‘skin-tight’ economy to enhance the living conditions of Ghanaians.

“Our economy has been held as one that is a bit ‘skin tight’, a ‘skin tight’ fitting hampers means of mobility and so needs expansion or loosening its fitness along seams. To do that will require the dexterity of an Oyadieyie (seamstress). The NDP has confidence in His Excellency the President as that Oyadieyie who must quickly loose the ‘skin tight’ economy along visible and invisible seams,” the NDP’s General Secretary, Mohammed Frimpong, said at the conference in Cape Coast.

He noted that the impending Free SHS programme to be implemented in September was one of such seams.

“The NPP can count on the support of the NDP in all the tasks of the Oyadieyie  in turning our ‘skin-tight’ economy into a loose one that provides better space for ease of our people.”

The PNC commended President Akufo-Addo for appointing its former presidential candidate, Dr Edward Mahama, as an envoy and appealed for more appointments from the PNC.

The party appealed to the NPP not to use the occasion to discuss matters of importance to the NPP only but deliberate on issues that would aim at improving the lot of majority of Ghanaians, adding that “we hope the NPP will not disappoint the people.”

It said the PNC would serve as a compass, giving praise where it was due and criticising too, all for the benefit of Ghana.