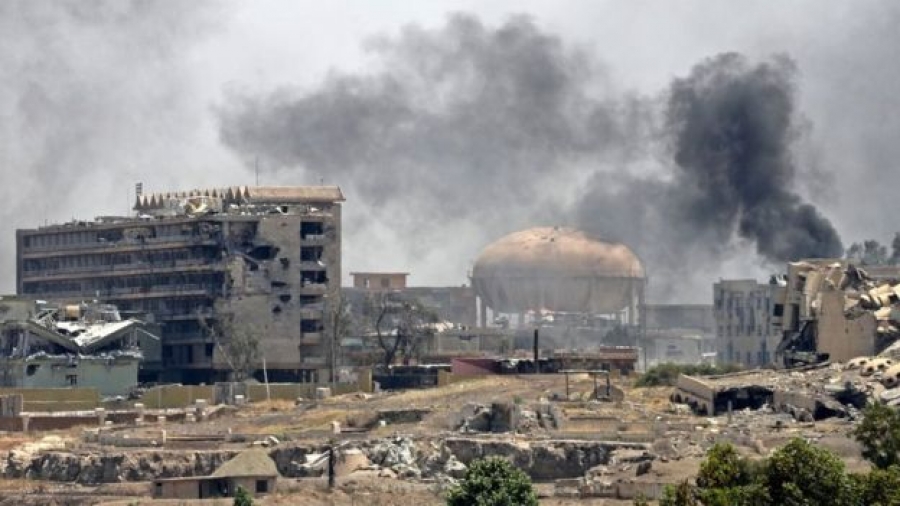 The UN has received reports that 231 Iraqi civilians have been killed by so-called Islamic State while attempting to flee Mosul over the past two weeks.

At least 204 are believed to have been shot dead by militants during clashes with Iraqi security forces in the Shifa district last Thursday and Saturday.

The UN said it had noted a "significant escalation" in such killings.

There are also reports of between 50 and 80 civilians being killed in an air strike on the Zanjili area on 31 May.

Pro-government forces launched an offensive to retake Mosul in October with the support of a US-led multinational coalition.

They managed to take full control of the eastern half of Mosul in January and started an assault on the west the following month.

Fewer than 1,000 militants are now besieged in IS-controlled parts of the Old City and several adjoining northern districts, along with some 100,000 civilians.

The UN Human Rights office said it had documented IS "use of civilians as human shields and its slaughter of those attempting to flee" since the start of the operation, but that recent reports indicated "a significant escalation in such killings".

On 26 May, militants reportedly shot at civilians trying to flee Shifa, killing 27 people, including 14 women and five children.

Another 163 civilians were allegedly shot dead next to a Pepsi factory in the same district last Thursday. Their bodies were reportedly left on the street for days.

And on Saturday, IS reportedly shot and killed at least 41 civilians as they attempted to flee Shifa towards Iraqi security forces locations.

That day, Reuters news agency journalists saw the bodies of dozens of civilians lying along a road leading out of Zanjili.

"Shooting children as they try to run to safety with their families - there are no words of condemnation strong enough for such despicable acts," UN High Commissioner for Human Rights Zeid Raad al-Hussein said.

"I call on the Iraqi authorities to ensure that those who are responsible for these horrors are held accountable and brought to justice in line with international human rights laws and standards. The victims of such terrible crimes must not be forgotten."

Mr Zeid also called on the Iraqi security forces and their coalition partners to ensure that their operations fully complied with international humanitarian law and that all possible measures were taken to avoid the loss of civilian lives.

In March, a coalition air strike on a building in western Mosul killed more than 100 Iraqi civilians by inadvertently setting off a large amount of explosives that IS militants had placed there, a US military investigation concluded last month.

The UN says at least 2,174 civilians have been killed and 1,516 injured across Nineveh province since the start of the Mosul offensive almost eight months ago.

More than 800,000 people - about a third of the pre-war population of Mosul - have been displaced over the same period, including 633,000 from the west of the city.