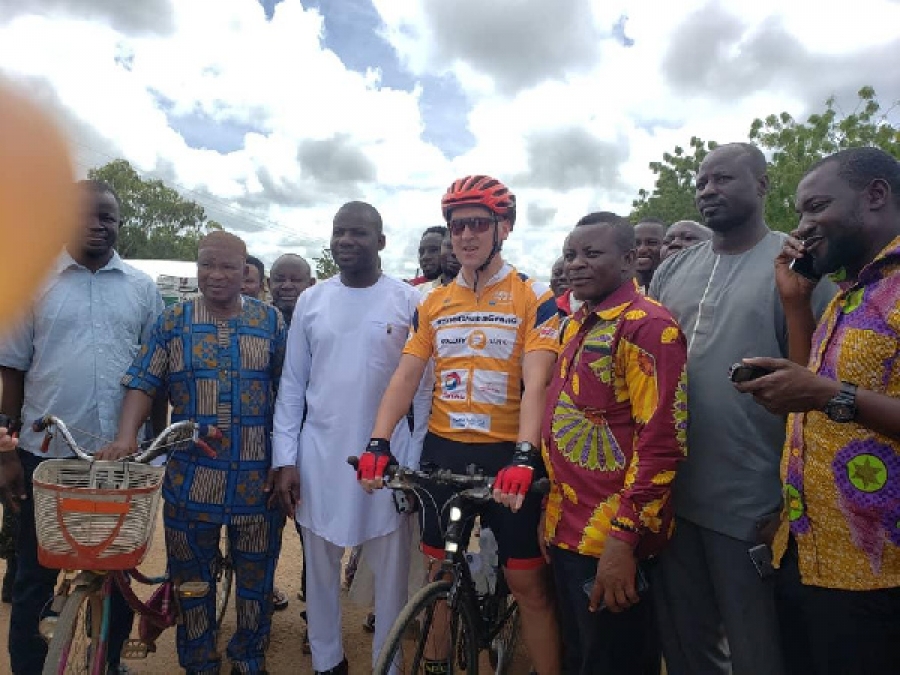 Mr Iain Walker the British High Commissioner to Ghana has begun his historic bicycle ride from Tumu in the Sissala East Municipality to Accra, the capital of Ghana.

His objective for such a feat is to afford him the opportunity to visit and interact with the local community members, promote healthy lifestyles and tourism as well as familiarise himself with some challenges of the local communities.

Mr Walker announced in April this year that he would be embarking on this ride.

He is being accompanied by one of his staff at the Commission and they have paid a courtesy call on the Sissala East Municipal Chief Executive (MCE), Mr Karim Nanyua.

“I really believe Good health is everything especially things like mental health which keeps people fit and going.

“If Ghana really wants to move beyond aid, health is one of the areas to invest in”, the High Commissioner noted.

He added that Ghana was a beautiful tourist destination, but must tackle issues of poor sanitary conditions in order to derive the full potential of the tourism sector.

“The ride will afford me the opportunity to see Ghana from a different perspective as I meet people in their own communities.

“It is good to come to Tumu and meet the people in their communities and I will like to see them at the back of a bike rather than through the window of 4x4 vehicle”, he said.

He praised the MCE and the people as well as the security for their hospitality and helpfulness especially the assistance they offered him and his team to cross the flooded Navariwie steel.

The bridge got buried in the valley after a river is said to have overflown its banks.

“I am not a cyclist myself, but I am challenging myself to do it and I urge all to also challenge themselves to do something positive for themselves and others in society”, he said.

Mr Nanyua on behalf of the president thanked the High Commissioner for choosing to start the challenge from Tumu, adding that the challenge was motivating enough for all of them to undertake a positive challenge.

Meanwhile, a tree seedling that was meant to be planted in Tumu to mark the beginning point of the bicycle ride was left behind in the vehicle of the High Commissioner as he could not cross the river with the vehicle.

Mr Walker, however, promised to come back to Tumu another time to have the tree planted.

The inability of the High Commissioner and his team to cross the Navariwie bridge with their vehicles to Tumu, where the ride was scheduled to start did not only delay the planned start time of the challenge for over four hours, but also exposed the bad nature of the Wa-Tumu-Bolgatanga road that linked the region to the Upper East Regions.