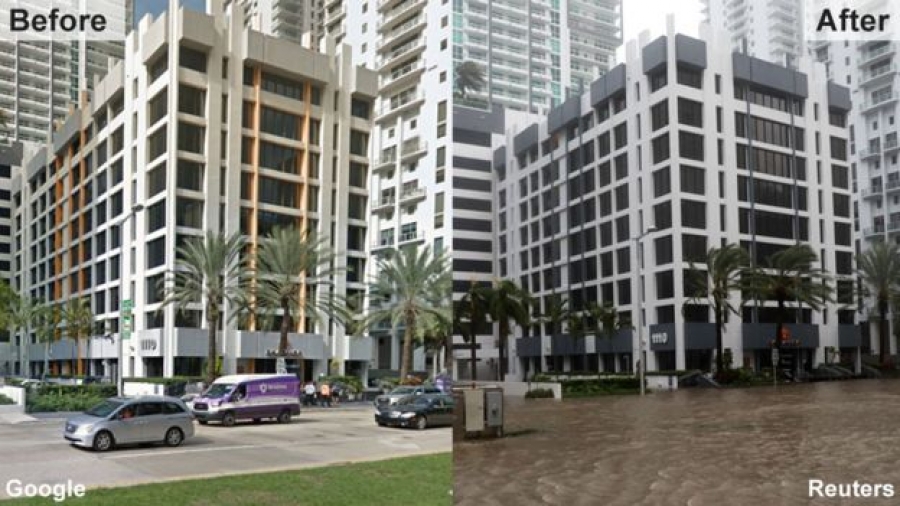 Search and rescue teams in Florida are due to swing into action as daylight reveals the extent of damage wreaked by Hurricane Irma.

The huge storm weakened as it moved up the state's western coast overnight but Miami and other urban areas have been battered and inundated.

In the islands of the Florida Keys, the local emergency manager has warned of a looming "humanitarian crisis".

Media reports link at least four deaths to the storm.

Irma is now a category one hurricane but still has maximum sustained winds of 75mph (120km/h).

It cut a devastating track across 10 Caribbean countries and territories, killing at least 28 people there.

How big will the disaster response be?

More than 3.4 million homes in Florida are without power. Power lines came down in 80% of Miami alone and large areas of the city were flooded, although the city appears to have escaped lightly compared to other parts.

Drone footage from Naples, a town on the coast of the Gulf of Mexico about 125 miles (200km) to the north-west, shows rows of shattered suburban homes on streets under water.

President Donald Trump has approved a major disaster declaration and emergency federal aid for Florida, describing the hurricane as a "big monster".

Funds will be needed to care for victims, clean up debris, restore power, and repair damage to homes and businesses.

The focus will be on the Keys, where as many as 10,000 people decided to ride out the storm, the BBC's Jane O'Brien reports from Miami.

The first task of the emergency services, she says, will be to check the condition of the 42 bridges linking the islands.

"Disaster mortuary teams", he said on Sunday afternoon, would be dispatched to the Keys, which are part of Monroe.

Florida Director of Emergency Management Bryan Koon told reporters the actual physical and human damage could not be ascertained before operations began.

Florida Governor Rick Scott continued to tweet storm warnings early on Monday. "As little as six inches [15cm] of moving water can knock you down," he said in one message. "Stay inside. Stay safe."

Where is the storm now?

Some three million people live in the Tampa Bay area. The region has not been hit by a major hurricane since 1921.

Irma is expected to weaken into a tropical storm over far northern Florida or southern Georgia later on Monday but first its centre will continue to move over the western Florida peninsula, the NHC said.

Storm surge warnings are in effect for:

How have residents felt the impact?

"We feel the building swaying all the time," restaurant owner Deme Lomas told Reuters news agency by phone from his 35th-floor apartment in Miami. "It's like being on a ship."

At least four deaths have been connected to the storm:

Some 6.3 million people in the state were told to evacuate before Irma arrived.

Amid fears of debris and reports of looting, curfews have been imposed in areas such as Miami-Dade County.

Which areas were hit before Florida?

Irma is the most powerful Atlantic storm in a decade, and has already caused widespread destruction on several Caribbean islands:

Another hurricane, Jose, has been weakening over the western Atlantic, with swells due to affect parts of Hispaniola (the island split into Haiti and the Dominican Republic), the Bahamas, and the Turks and Caicos Islands, over the next couple of days.