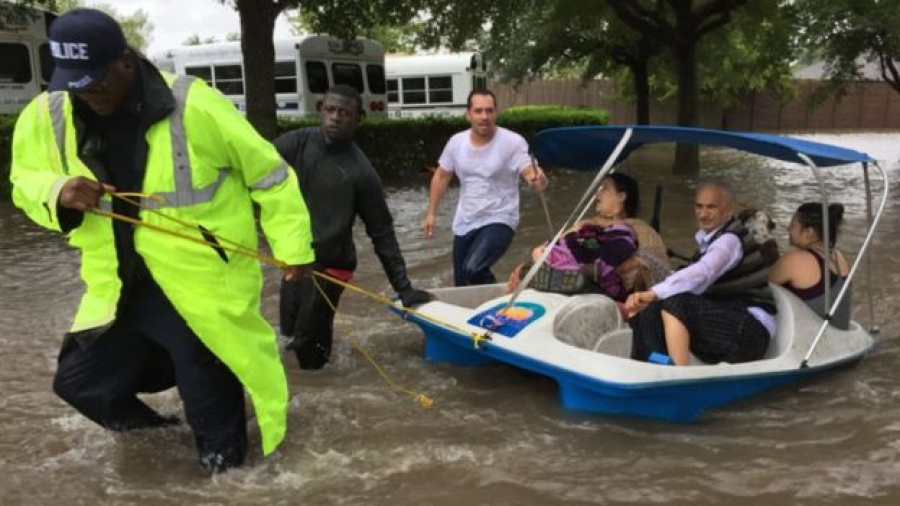 A major dam outside Houston has begun overflowing as Storm Harvey pushes the reservoir past capacity, Texas officials say.

Engineers have tried to prevent nearby communities from being inundated by releasing some of the water held by the Addicks dam.

But flood control official Jeff Lindner says water levels are now over the height of the reservoir edge.

Harvey has brought huge floods to Texas and is starting to affect Louisiana.

Unprecedented rainfall has forced thousands of people to flee their homes in the Houston area while rescuers are trying to reach others that remain stranded.

At least nine people are reported to have died, including six members of the same family whose van was swept away by rising floodwater, and a man in his 60s who apparently drowned while trying to swim to safety.

While a spillover would not cause the Addicks dam to fail, it would add to flooding in areas close to the Buffalo Bayou, the main river into Houston - the fourth largest city in the US.

Experts are also concerned about the Barker dam, which also controls the amount of water in the river. The flood gauges on the dam have themselves been put out of action by the deluge.

Meanwhile, officials in Brazoria County, south of Houston, said a levee at Columbia Lakes had been breached, tweeting: "Get out now!"

Meanwhile, rain is continuing to fall. In Houston, forecasts suggest that some areas in and around the city could see up to 12in (30cm) of further rain on Tuesday.

One neighbourhood in south Houston has seen the heaviest total rainfall from a tropical storm in the US since records began in the 1950s, the National Weather Service says.

A total of 49.2in has fallen at Mary's Creek at Winding Road, beating the previous record of 48in.

Harvey was the most powerful hurricane to hit Texas in more than 50 years when it made landfall on Friday near Corpus Christi, 220 miles (354km) south-west of Houston.

The slow-moving storm - currently over the Gulf of Mexico - will continue to dump huge amounts of rain in the coming days over already flood-hit areas.

All day in the suburbs to the west of Houston, hundreds of families waded cautiously along a road they usually take to the shops, to school and to work.

It was an exhausting journey of well over a mile in waist-high flooding.

All night, as water lapped into their homes, people had been calling for help, they said, but no-one came.

Eventually a lone police officer arrived but by then people had taken matters into their own hands, forming a makeshift armada of little boats, jet skis, blow-up mattresses and even rubber rings.

All day long they streamed out in the teeming rain.

Occasionally someone would collapse and have to be helped up. Some children cried but most sat in shocked, soaking silence as they bobbed along on their inflatable rafts, teeth chattering in the cold.

Wading through the water, Anthony Rogers, 54, summed up the mood. The authorities, he said, had been "useless".

Water in the Addicks reservoir exceeded 108ft (32.9m) on Tuesday, geological data shows, causing it to flow over the top of defences.

Officials said the overspill could cause further flooding in nearby communities but the exact impact was unknown.

"This is something we've never faced before, so we're trying our best to wrap around what exactly this water is going to do," Jeff Lindner said.