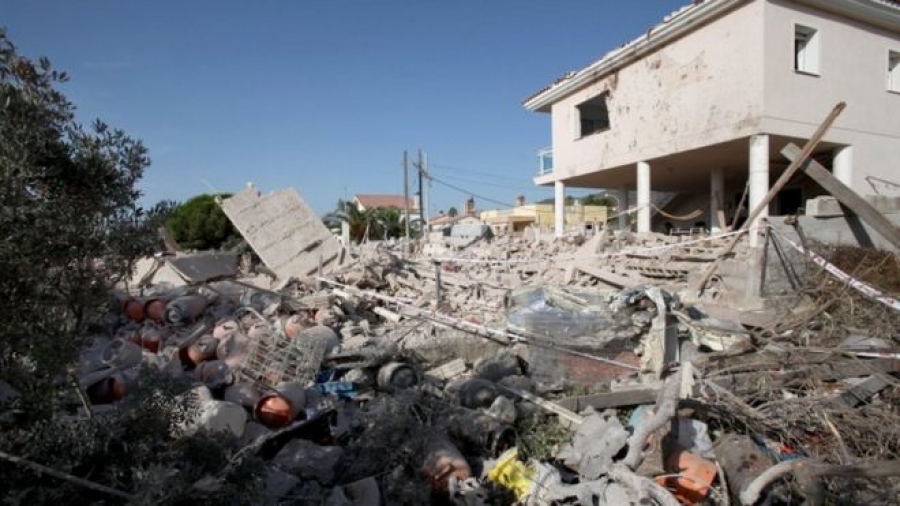 A 12-strong terror cell that carried out two attacks in Spain this week had collected 120 gas canisters and was planning to use them in vehicle attacks, Spanish police say.

Canisters were found at a house said to be used by the cell that blew up in the town of Alcanar on Wednesday night.

Police are still hunting for the driver of the van that hit dozens of people on Barcelona's Las Ramblas, killing 13.

On Sunday, a Mass was held in Barcelona to mourn the victims.

In addition to the 13 killed on Thursday afternoon on Las Ramblas, a woman died in a second vehicle attack early on Friday in the town of Cambrils. Five suspected jihadists were shot dead by police in the second attack.

The Catalan authorities have also confirmed that a British-Australian seven-year-old, Julian Cadman, was among those killed in Barcelona.

He had been missing since becoming separated from his injured mother in the attack and his family had put out appeals for news of his whereabouts.

Catalan police chief Josep Lluis Trapero has given an update on the investigation.

He said the cell was still believed to consist of 12 men and had been planning attacks for more than six months. One person remained at large, four were under arrest and there were two sets of human remains to be identified, he added.

The person at large was the driver of the van, Mr Trapero said, adding that police knew his identity but would not reveal it.

But police have confirmed they are hunting Moroccan-born Younes Abouyaaqoub, 22, who Spanish media say was the driver.

The two sets of remains to be identified may refer to victims of the house explosion at Alcanar.

Spanish media have speculated the two may be Youssef Aallaa, the brother of one of the suspected jihadists killed at Cambrils, and Abdelbaki Es Satty, an imam from the town of Ripoll, north of Barcelona, where a number of the suspects are from.

The imam apparently left the mosque abruptly in June and has not been seen since. The mosque president said he had told him he wanted to go back to Morocco.

"We're starting to see clearly that [the Alcanar house] was the place where they were preparing explosives for one or more attacks in the city of Barcelona," Mr Trapero said.

He added: "We are not in a position to say what caused the radicalisation of these people."

Mr Trapero said police could not rule out that the suspect still at large had crossed the French border, although he had "no specific information on this".

The father of two of those shot dead by police in Cambrils, Mohamed and Omar Hychami, told the BBC he was devastated. Hecham Igasi also accused the imam of radicalising his sons.

It is now known that three vehicles were rented under the credit card of Younes Abouyaaqoub.

One was used in the Las Ramblas attack, another was found after the attack in the town of Vic and a third in Ripoll.

Mr Trapero said the cell had planned to fill all three with explosive material to carry out attacks.

On Sunday, King Felipe and Queen Letizia attended Barcelona's Sagrada Familia to mourn those killed in the attacks

Some reports in Spanish media say the jihadist cell had intended to target the iconic, Gaudi-designed church with explosives.

Cardinal Juan José Omella, the Archbishop of Barcelona, called for peace and unity, saying: "We will overcome fear."

He read a message from Pope Francis, which said the pontiff "condemns once again the violence, which is a very grave offence against the creator, and he prays to God for help so we can continue working for peace and harmony in the world".

As the debate about possible Catalan independence continues, Cardinal Omella added: "The union makes us strong, the division corrodes us and destroys us.

Later on Sunday, Barcelona FC will hold their first league game of the season, with 100,000 expected at the Camp Nou, where there will be a minute's silence. Police have warned spectators to expect stepped up security, including a ban on bringing large bags.

Who are the suspects?

So-called Islamic State (IS) said it had carried out the Las Ramblas attack, though it is not clear whether any of the attackers were directly connected to the group or simply inspired by it.

These names of the dead have so far been released:

The latest breakdown from Catalan emergency services on the injured reads: