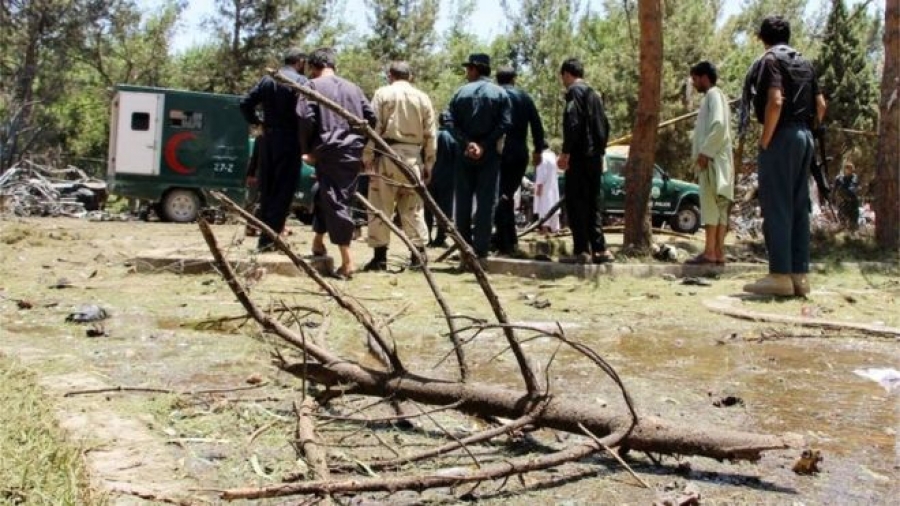 At least 29 people have been killed and 60 wounded in a car bomb blast outside a bank in the southern Afghan province of Helmand, hospital officials say.

Police told the BBC the bomb was detonated at the gate of the New Kabul Bank branch in Lashkar Gah.

Civilians and members of the security forces are reportedly among casualties.

There was no immediate claim of responsibility but Taliban and Islamic State militants have carried out deadly attacks in recent months.

The head of the hospital in Lashkar Gah, Mawladad Tabedar, told BBC Afghan the number of casualties might rise.

Earlier, Tolo News reported that armed attackers had entered the bank and engaged in a gun battle with security forces.

"It happened at a time when civilians and officials had lined up outside the bank to collect their salaries," a police spokesman, Salam Afghan, told AFP news agency.

Bank buildings have been repeatedly attacked in recent years in Afghanistan as civilians and military personnel receive their monthly salaries from them.

A spokesman for Afghan Chief Executive Abdullah Abdullah tweeted that most of the victims were "innocent souls who were shopping for Eid".

There has been a series of attacks in Afghanistan in recent weeks, since the Taliban launched its so-called spring offensive.

On Sunday, five police officers were killed and about 30 people, most of them civilians, were injured in a suicide bomb attack in the eastern city of Gardez.

On 31 May a huge bombing in central Kabul killed more than 150 people, the deadliest militant attack in the country since US-led forces ousted the Taliban from power in 2001.

The insurgents control swathes of Helmand province, whose capital is Lashkar Gah.

In March the crucial district of Sangin fell to the militants after a year-long battle. Musa Qala was captured last year.