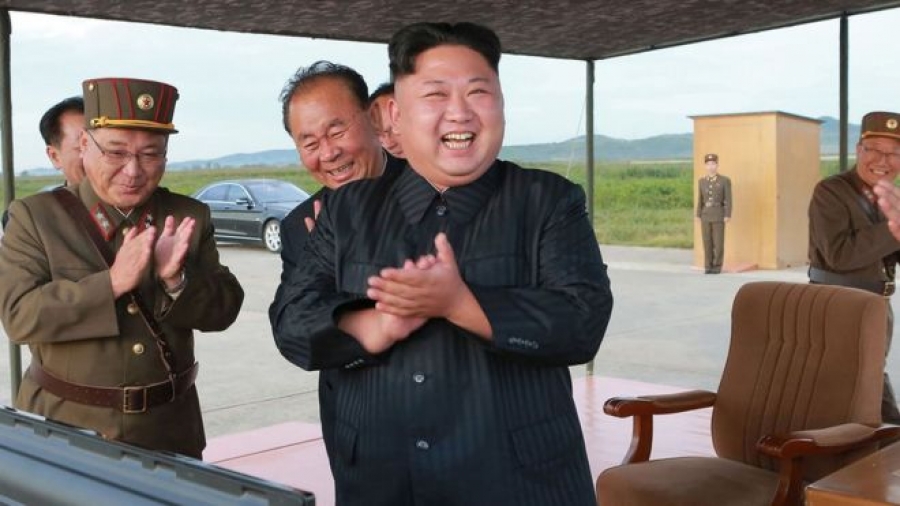 North Korea has warned that more sanctions and pressure will only make it accelerate its nuclear programme.

In a strongly worded statement, the foreign ministry called a new round of restrictions imposed by the United Nations "the most vicious, unethical and inhumane act of hostility".

Meanwhile, the US and South Korea carried out joint military exercises over the Korean peninsula.

North Korea will be a key issue at the UN General Assembly this week.

The country fired its latest missile over Japan on Friday, in what was described as its farthest-reaching test.

The launch, which followed a fresh round of UN sanctions, was unanimously condemned by the UN Security Council as "highly provocative".

What has North Korea said?

The foreign ministry statement, carried by the country's official news agency KCNA, said: "The increased moves of the US and its vassal forces to impose sanctions and pressure on the DPRK [Democratic People's Republic of Korea] will only increase our pace towards the ultimate completion of the state nuclear force."

It also said that the goal of the new UN sanctions, approved on 11 September, was to "physically exterminate" the country's people, system and government.

The sanctions are an attempt to starve North Korea of fuel and income for its weapons programmes, and restrict oil imports and ban textile exports.

The fresh measures followed the sixth and most powerful nuclear test conducted by Pyongyang earlier this month.

But some critics have raised questions over the effectiveness of the restrictions, as North Korea is still able to trade internationally.

The country's commerce with China was partially responsible for an estimated economic growth of 3.9% last year, Bloomberg news agency reports.

How is the world responding?

The issue of North Korea's weapons programme is expected to dominate US President Donald Trump's address at the UN General Assembly and his meetings with the leaders of South Korea and Japan.

Mr Trump previously warned that "all options" were on the table and that North Korea would face "fire and fury" if it continued to threaten the US.

Washington has repeatedly urged Beijing to do more direct actions to rein in Pyongyang, while China - North Korea's main ally - says the US should refrain should refrain from issuing more threats.

Russia has also criticised what it describes as "aggressive rhetoric" from the US.

China and Russia only agreed to the new UN sanctions after they were softened by the US. Both countries have repeatedly called for a diplomatic solution to the crisis.

What about US-South Korea military drills?

The US military carried out an aerial military drill on Monday with South Korea near the border between the Koreas, the defence ministry in Seoul said.

The drill was to "demonstrate the deterrence capability of the US-South Korea alliance against North Korea's nuclear and missile threats", it added.

Defence Minister Song Young-moo told a parliamentary hearing that the exercises were being conducted "two to three times a month these days", Reuters news agency reports.

Separately, China and Russia began a joint naval exercise east of the Korean peninsula but it is unclear if it is linked to current tensions in the region.