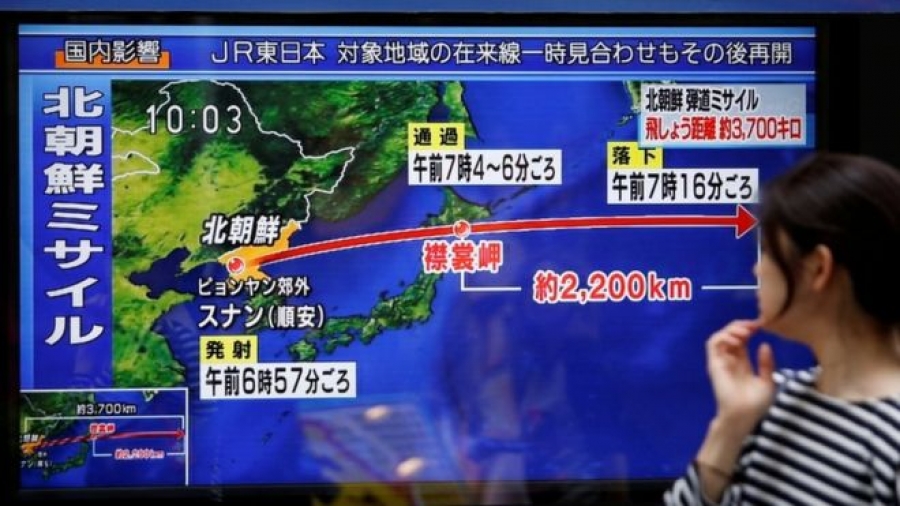 North Korea has fired a ballistic missile across Japan, creating new tension in the region after its nuclear bomb test less than two weeks ago.

The missile reached an altitude of about 770km (478 miles), travelling 3,700km before landing in the sea off Hokkaido, South Korea's military says.

It flew higher and further than one fired over Japan late last month.

South Korea responded within minutes by firing two ballistic missiles into the sea in a simulated strike on the North.

US Secretary of State Rex Tillerson also condemned the launch and the UN Security Council will meet later on Friday in New York at the request of America and Japan.

Why does this new test matter?

As with the last test on 29 August, the missile flew over Japan's northern Hokkaido island before splashing down in the Pacific Ocean. There were no immediate reports of damage to aircraft or ships.

Sirens sounded across the region and text message alerts were sent out warning people to take cover.

What is so alarming about the new launch is that the US Pacific territory of Guam, which North Korea says it has plans to fire missiles towards, is 3,400km from Pyongyang, putting it within range of the latest missile.

Sanctions on the North were tightened this week in response to its sixth nuclear test on 3 September, which reportedly involved a miniaturised hydrogen bomb that could be loaded on to a long-range missile.

How will the international community respond?

After the latest round of sanctions, it is not clear what other course of action is open to the UN Security Council.

Only on Monday, the Security Council voted unanimously to restrict oil imports and ban textile exports, in an attempt to starve the North of fuel and income for its weapons programmes.

Mr Tillerson put the burden of response to the latest test on China and Russia, the North's main economic partners.

They "must indicate their intolerance for these reckless missile launches by taking direct actions of their own", he said.

Nato chief Jens Stoltenberg described the missile launch as "another reckless breach of UN resolutions" and a "major threat to international peace and security which demands a global response".

In South Korea, President Moon Jae-in held an emergency meeting of his national security council, where he said that dialogue with the North was "impossible in a situation like this".

Officials have been ordered to prepare for possible North Korean chemical, biological and electromagnetic pulse attacks, a presidential spokesman said.

It insists it needs a nuclear-weapons programme to ensure its survival and there has been no let-up in its fiery rhetoric.

On Thursday, it threatened to "sink Japan and turn America to ashes".