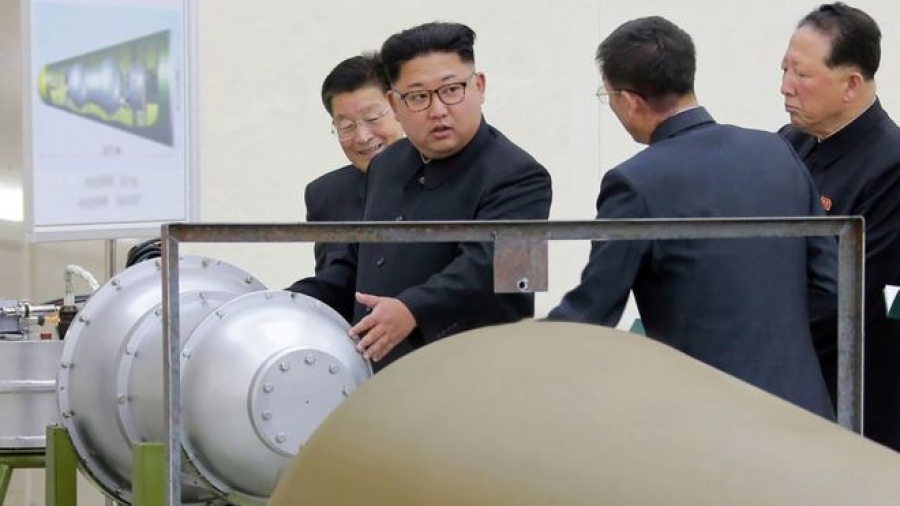 The United Nations has imposed a fresh round of sanctions on North Korea after its sixth and largest nuclear test.

The measures restrict oil imports and ban textile exports - an attempt to starve the North of fuel and income for its weapons programmes.

The US had originally proposed harsher sanctions including a total ban on oil imports.

The vote was only passed unanimously after Pyongyang allies Russia and China agreed to the reduced measures.

The sanctions, which were passed at a UN Security Council meeting on Monday, were met with anger by North Korea.

A statement on state news agency KNCA warned that if the US did eventually push through harsher sanctions, North Korea would "absolutely make sure that the US pays due price".

The US call last week for a total ban on oil imports was seen as by some analysts as potentially destabilising for the regime.

The new sanctions agreed by the UN include:

A proposed asset freeze and a travel ban on North Korean leader Kim Jong-un were dropped.

The US ambassador to the UN Nikki Haley, told the Security Council after the vote: "We don't take pleasure in further strengthening sanctions today. We are not looking for war."

A South Korean presidential office spokesman said on Tuesday: "North Korea needs to realise that a reckless challenge against international peace will only bring about even stronger sanctions against them."

What have previous sanctions achieved?

It also repeated its call for a "peaceful resolution" instead of a military response, adding: "China will never allow the peninsula to descend into war and chaos."

The BBC's China editor Carrie Gracie says Beijing is treading a fine line and wants sanctions tough enough to signal its displeasure to Pyongyang and avoid American accusations of complicity, but not so tough as to threaten North Korea's survival.

Both Russia and China reiterated their proposal that the US and South Korea freeze all military drills - which anger North Korea - and asked for a halt in the deployment of the controversial anti-missile system Thaad, in exchange for Pyongyang's cessation of its weapons programmes.

Beijing believes Thaad, which employs a powerful radar, is a security threat to China and neighbouring countries.