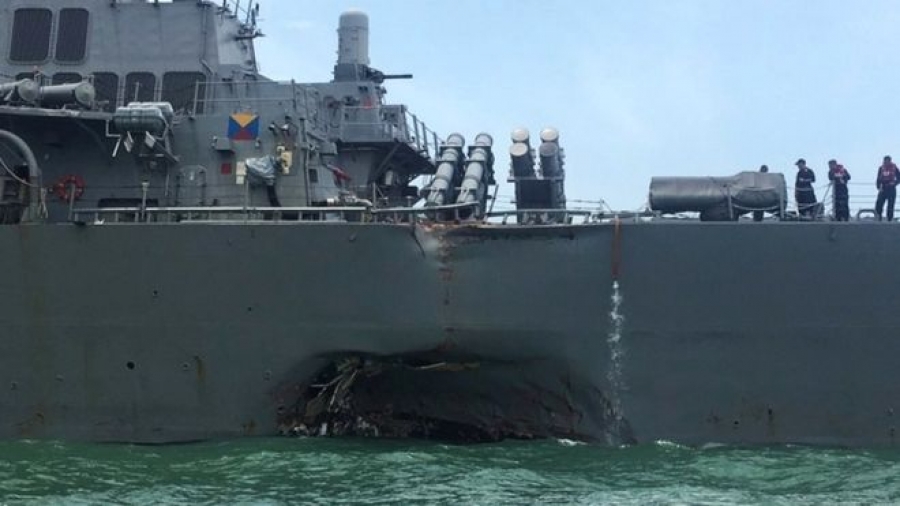 US Navy ship and oil tanker collide near Singapore Featured

Ten US Navy sailors are missing and five have been injured after a US destroyer and an oil tanker collided near Singapore, the Navy says.

The guided missile destroyer USS John S McCain was sailing east of Singapore and preparing to stop in the port when the collision with the Liberian-flagged vessel occurred.

A wide-ranging search and rescue operation is under way.

It is the second collision involving a US Navy ship in recent months.

What do we know about the collision?

It was reported before dawn at 05:24 local time on Monday (21:24 GMT on Sunday) and took place east of the Strait of Singapore, as the USS John S McCain prepared to perform a routine port stop in Singapore.

Singapore and US authorities said the destroyer sustained damage to her port side, which is the left-hand side of the vessel facing forward.

The tanker it collided with, Alnic MC, sustained damage to a tank near the front of the ship 7m (23ft) above the waterline, but none of its crew were injured and there were no oil spills.

What is happening now?

US military helicopters as well as the Singaporean and Malaysian navies and coast guards are currently conducting search and rescue operations.

Malaysian Navy chief Admiral Kamarulzaman said a message had been sent to fishing vessels along the Johor and Pahang coasts to keep a look out for missing sailors.

The US Navy said four of the injured sailors had non-life threatening injuries and were medically evacuated to a Singapore hospital. The fifth person did not require further medical attention.

The destroyer is now sailing under its own power and heading to Singapore's Changi naval base. The Alnic MC is making its way to port in Singapore.

One crew member of the oil tanker told Reuters over the phone that the vessel sustained some damage to a valve. The ship was carrying nearly 12,000 tonnes of oil from Taiwan to Singapore, the news agency reported.

The Maritime and Port Authority of Singapore said: "There is no report of oil pollution and traffic in the Singapore Strait is unaffected."

The timing of this is awkward for the United States. It's the first day of annual drills between the US and South Korean armies, a show of might in the face of North Korean belligerence.

The USS John McCain is part of the US Navy's 7th Fleet, its largest fleet, but this accident will add to questions about the operations of the navy in the region more widely.

This is the same naval group that saw a similar accident only in June, when seven US sailors lost their lives. Just last week several officers were disciplined in relation to that incident.

This is also thought to be the fourth such collision involving US warships in the past year alone.

Add to this the confusion earlier this year over the whereabouts of another US warship in the Pacific - the USS Carl Vinson - which President Trump said was sailing for North Korea, but was actually headed in the opposite direction for training exercises with the Australian navy.

What's the response so far?

Shortly after news of the collision came out, the US chief of naval operations, John Richardson, tweeted that the first priority was to determine the safety of the ship and the crew.

US senator John McCain tweeted that he and his wife were praying for the sailors.

Has this happened before?

This is thought to be the fourth time in a year that a US navy vessel has been involved in an accident.

Just two months ago, seven US sailors were killed when the USS Fitzgerald collided with a container ship in Japanese waters near the port city of Yokosuka.

Those who died were found in flooded berths on board the ship after the collision caused a gash under the warship's waterline.

The US Navy said last week that about a dozen sailors would be disciplined, and the commanding officer and other senior crew would be taken off the ship.

In May, a guided missile cruiser collided with a South Korean fishing vessel, while in August last year a submarine collided with an offshore support vessel.