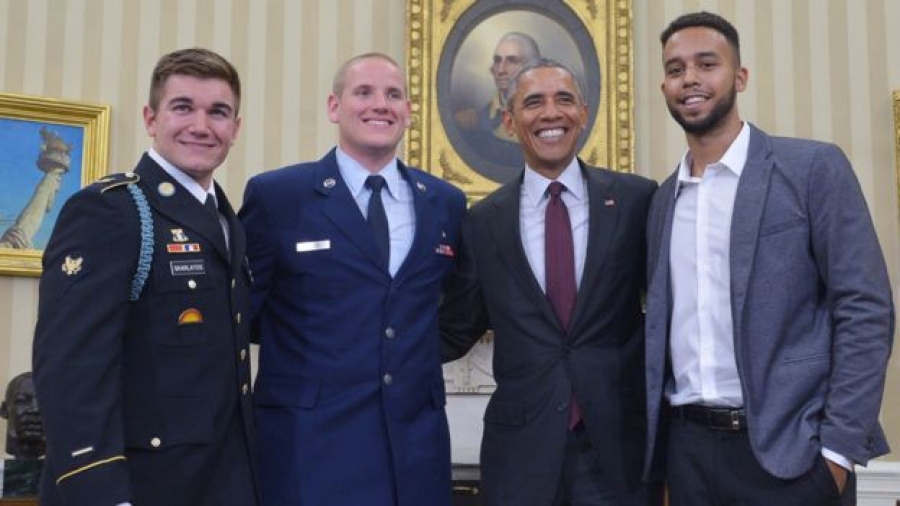 Clint Eastwood's new film about three Americans who stopped a terror attack on a train to Paris will star the real-life heroes of that 2015 incident.

Anthony Sadler, Alek Skarlatos and Spencer Stone will play themselves in The 15:17 to Paris, based on the book they co-wrote with Jeffrey E Stern.

Actors will play younger versions of the trio in the film, which is thought to focus on the three men's friendship.

The men were awarded Legion d'honneur medals for their actions.

They also received a hero award from Eastwood himself at an awards ceremony last year.

Sadler, Skarlatos and Stone were among a number of passengers who overpowered a heavily armed man who had opened fire on the train.

Stone and Skarlatos were both off-duty servicemen, while Sadler was a student at California State University.

The man they apprehended was later named as Ayoub El-Khazzani, a Moroccan believed to have had links to radical Islam.

The film is the latest in a series of movies Eastwood has made based on real-life people in extraordinary situations.

His last film, Sully, told of pilot Chesley Sullenberger, who landed his damaged plane on the Hudson River in 2009.

If made, The 15:17 to Paris will not be the first fact-inspired film to feature non-actors in leading roles.

In 2012 release Act of Valour, real-life Navy Seals were shown embarking on a fictional covert mission.

There is a tradition, meanwhile, of the subjects of Hollywood biopics appearing in the films they inspired.

Jim Garrison had a small role in JFK, which dramatised his investigations into the Kennedy assassination, while lawyer Erin Brockovich made a cameo in the 2000 film about her life.

Another notable example is Audie Murphy, a decorated soldier who turned to acting after World War II and went on to play himself in the 1955 film version of his memoir To Hell and Back.