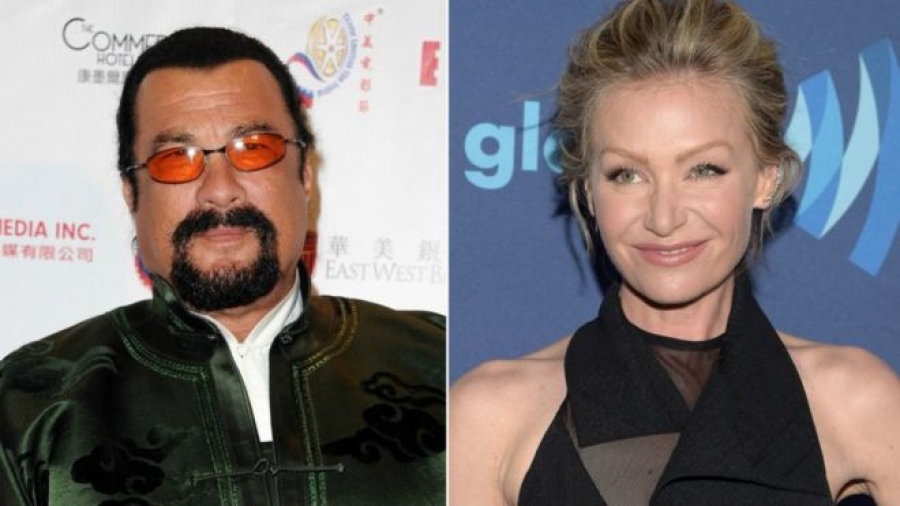 The Arrested Development actress, who is married to US talk show host Ellen DeGeneres, made the allegation in a tweet posted on Wednesday night.

She alleges that during a film audition Mr Seagal told her "how important it was to have chemistry off-screen" before unzipping his trousers.

Mr Seagal's manager told BBC News that the actor had no comment.

The 65-year-old is best known for his action roles during the 1980s and 1990s, including Under Siege and Flight of Fury. He was given Russian citizenship by President Vladimir Putin in 2016.

Several other women have come forward to accuse Mr Seagal of inappropriate behaviour and harassment, including the Good Wife actress Julianna Margulies and model Jenny McCarthy.

He is the latest person in Hollywood to stand accused of sexual harassment or sexual assault after women began coming forward about producer Harvey Weinstein.

Harvey Weinstein has denied all allegations of non-consensual sex made against him.

In the tweet, Ms de Rossi said her complaints about Mr Seagal's behaviour were dismissed at the time by her agent.

She did not specify which movie the audition was for, or in which year the incident allegedly happened.

The Australian-American actress has been married to television host Ellen DeGeneres for nine years.

Ms DeGeneres shared Ms de Rossi's tweet with her 75 million followers on Thursday with the caption: "I am proud of my wife".