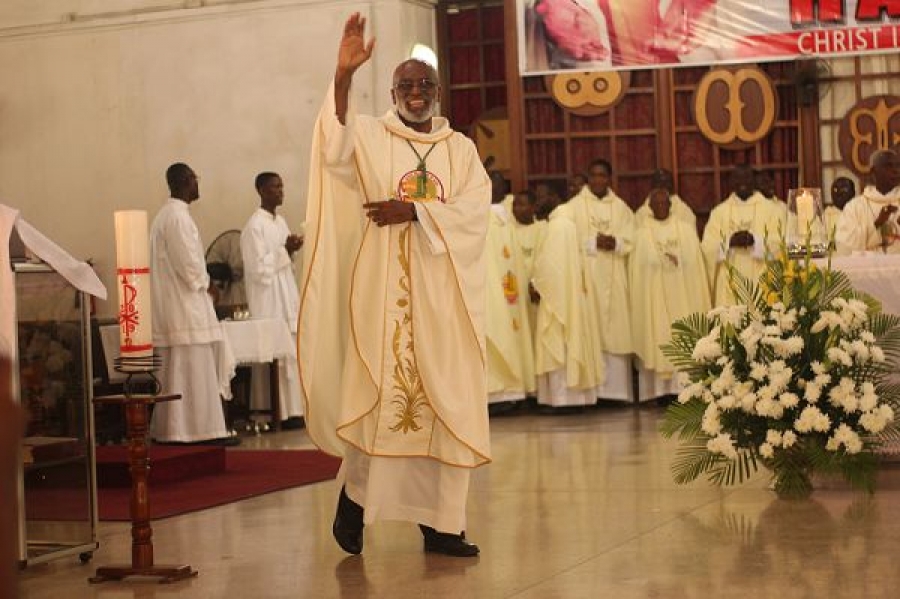 A Farewell Mass has been held for the immediate past Metropolitan Archbishop of Accra, the Most Rev. Charles Gabriel Palmer-Buckle.

The solemn Mass at the Holy Spirit Cathedral, Adabraka, attracted a large number of Catholics and members of the public.

Most Rev. Palmer-Buckle, who served the Accra Archdiocese for 13 years, was made the Archbishop of the Cape Coast Archdiocese, the oldest Catholic Archdiocese in Ghana in May 2018, following the resignation (retirement) of Archbishop Mathias Nketsiah of Cape Coast.

The Accra Archdiocese presented a 2015 Nissan Sentra model, an undisclosed amount and some items to Most Rev. Palmer-Buckle for his dedication to the work of God.

Most Rev. Palmer-Buckle lauded the National Chief Imam, Sheikh Osman Nuhu Sharabutu, for his role in ensuring peaceful coexistence between Muslims and Christians in Ghana.

According to him, the Chief Imam’s visit to the Christ the King Catholic Church in Accra ahead of his 100th birthday celebration was an indication of the existing harmony between Muslims and Christians in the country.

The visit was a reciprocal gesture to deepen religious tolerance following similar visits to the Chief Imam by Archbishop Palmer-Buckle and Pastor Mensa Otabil.

Most Rev. Palmer-Buckle further stated that maintaining the prevailing peace and tranquility between the two religious bodies needed the concerted effort of all, and called on followers to work towards safeguarding the peace in the country.

On the youth, he urged the Church to invest in their development for the accelerated growth of the country.

The Metropolitan Archbishop of the Catholic Archdiocese of Accra, Most Rev. John Bonaventure Kwofie, commended his counterpart for his exemplary leadership skills and hard work over the years.

He assured his predecessor that he would continue with his good works.

He was educated at the Pope John Senior High School and Minor Seminary in Koforidua and at the Pontifical Urban University where he obtained a bachelor's degree in Philosophy and Sacred Theology.

Most Rev. Palmer-Buckle also holds a doctorate degree in Sacred Theology from the Pontifical Salesian University in Rome. He served as a chaplain and teacher at the Pope John Senior High School and Minor Seminary and at Achimota School.

From 1994 to 2004, he served as the Bishop-Chairman for the Department of Socio-Economic Development of the Catholic Bishops’ Conference in Ghana, and from 1995 to 2003 was President of Caritas Africa Region, becoming the First Vice-President of Caritas International, a federation of 198-member organisations in 154 countries all over the world with its headquarters in the Vatican City.

Most Rev.Palmer-Buckle was also a member of the nine-member National Reconciliation Commission (NRC) from May 2002 to October 2004.

He has remained vocal in the political scene of Ghana and Africa on issues, including political violence and homosexuality.