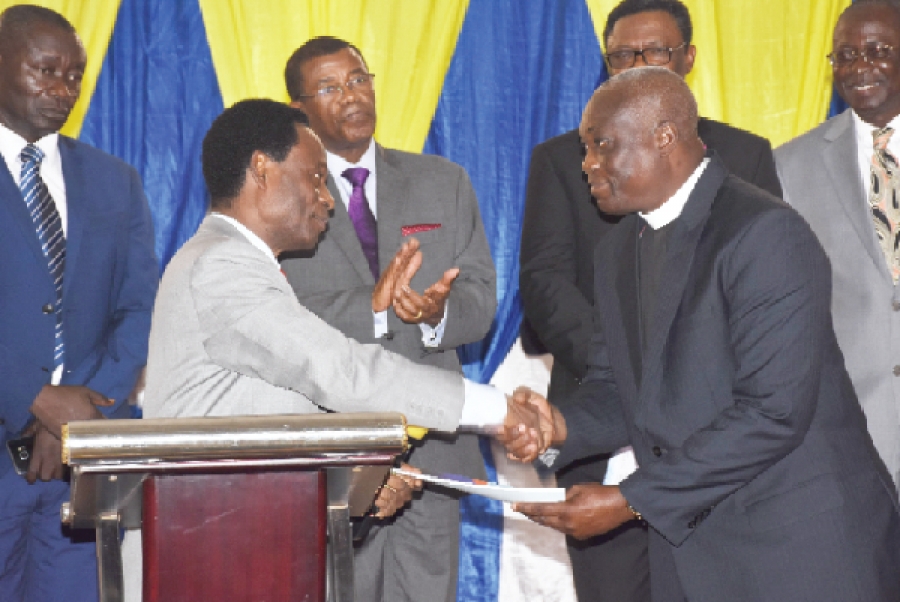 President of the Ghana Pentecostal and Charismatic Council (GPCC), Apostle Professor Opoku Onyinah, has urged Christian groupings to unite to police the government and make key inputs into the country's development agenda.

"As Christian groups forming about 71 per cent of the country's population, we have our differences in the way of worship and approach to doing things, but we will be bigger than the differences and contribute significantly to national development," he said.

He was speaking at a ceremony held last Saturday to bid farewell to the outgoing General Secretary of the GPCC, Apostle Samuel Y. Antwi, and induct into office Reverend Emmanuel T. Barrigah as the successor.

Apostle Onyinah urged the clergy to be strong and firm on national issues that would benefit the masses and not be worried about being tagged with political colours.

"Today, I do not know if the GPCC will be tagged as being an affiliate of the National Democratic Congress (NDC) or the New Patriotic Party (NPP), but whatever the tag may be, let us keep saying the things that matter for this country," he stressed.

He stressed the need for the political leadership of the country to justify the confidence reposed in it by the citizens by being transparent and responsible in the decisions it made.

He said the focus of the government ought to be on fixing the numerous development challenges, instead of complaining about the odds.

Launching a five-year strategic plan of the GPCC that outlines key development initiatives, including community development, Apostle Onyinah urged the church to realign its activities to remain relevant to socio-economic development.

At the event, a National Executive Committee (NEC) member, Rev. Samuel N. Mensah, called on the President and his appointees to walk the talk in the fight against corruption and the implementation of the policies he promised the citizens.

“Leaders fix problems; they do not complain. It is the duty of the followers to complain when things are not going well, while leaders have the responsibility to fix what the followers complain about because leadership is about improving the lives of the masses,” he stressed.

He also urged the government to put in place measures to promote the efficient use of local resources to solve local challenges.

According to him, the country would only be on the path of development if the leaders were able to put in place structures that would make people believe in the ability of local people to find solutions to the country’s problems.

“The solution to the problems of this country does not lie in the hands of any foreigner. It has to take Ghanaians to find practical solutions to Ghanaian problems because most of those problems were created by the local people,” he said.

For his part, the General Secreary of the Christian Council of Ghana, Rev. Dr Kwabena Opuni-Frimpong, underscored the need for leadership on all fronts to be God-fearing and accountable to the people.

He urged people in positions of trust to stay away from corrupt tendencies.

Apostle Antwi, who had held the General Secretary position for the last eight years, gracefully bowed out of office after he handed over the baton to Rev. Barrigah to lead the GPCC for the next four years.

The colourful ceremony was graced by stalwarts in the clergy fraternity, including the Founder of the Perez Chapel, Bishop Charles Agyinasare.

The inductee thanked the entire membership of the GPCC for reposing confidence in him and promised to be diligent in his service to God and humanity.