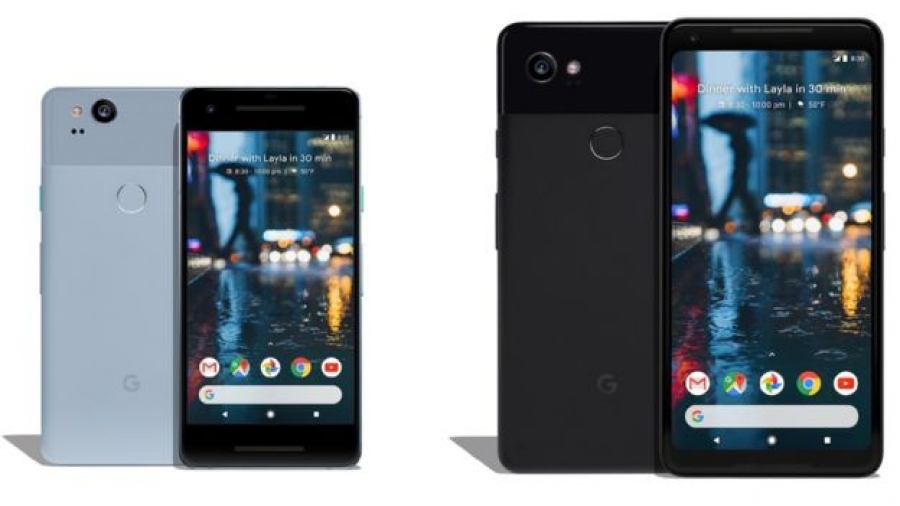 Google's second-generation Pixel mobile phones are able to take "portrait mode" photos via both their front and rear single-lens cameras.

Other handsets have been able to auto-blur image backgrounds for some time, but they typically rely on using two-lens cameras on the phones' backs to create realistic effects.

Google said its innovation meant it could make more space for the battery and introduce front-facing speakers.

But it has dropped the headphone jack.

Instead of using a dedicated 3.5mm port, users will either need to use wireless headphones - Google is selling a pair called the Pixel Buds - or the USB-C charging socket.

At the launch of the original Pixel phones, the search firm had mocked Apple's abandonment of the traditional socket and made a virtue of its opposite strategy.

A spokesman defended the U-turn saying Pixel's engineers believed USB-C had "matured as a standard" over the past year.

About 2.8 million units of the original Pixel phones have shipped since their launch a year ago, according to research firm IDC, representing just 0.5% of the wider smartphone market.

Sales were in part limited by the firm's inability to make enough of the devices to meet demand.

Google said it was producing the Pixel 2 and larger Pixel 2 XL models "in greater numbers".

But one expert questioned whether it had done enough to pose a serious challenge to other Android phone-makers.

"Launching a device in a region such as Western Europe, requires support to 50-plus operators and 70-plus retailers," said IDC's Francisco Jeronimo.

"Google will have to put in place a massive sales and marketing organisation to be able to compete with Samsung and Huawei."

The Pixel line-up is in part an effort to make sure consumers are always offered the latest version of Android. The phones are guaranteed the latest release as soon as Google makes it available, for at least three years - unlike other brands.

However, the tech giant was also keen to promote several unique features at its San Francisco launch.

The single-lens portrait mode photos were made possible by its adoption of a dual-pixel sensor - meaning each pixel can be used to both record the image and determine focus rather than just one or the other.

Some of Samsung's handsets already feature the technology, but Google has built on it with proprietary software to make it possible to create a depth map for photos, which can be used to add special effects.

An added benefit of this approach is that the new phones' front "selfie" cameras can also use portrait mode. And in the months to come, Google intends to make use of the depth information to let users add advanced augmented reality characters to their images.

Another new feature is the ability to summon the Google Assistant artificial intelligence helper by squeezing the handsets' sides.

The firm suggested this made it easier to activate, adding that it had trained the software to only pay attention to deliberate squeezes.

In addition, the OLED (organic light-emitting diode) screens now automatically show the name of a song if it is heard playing in the surrounding area.

The Shazam-like feature relies on a database of tens of thousands of tracks downloaded to the device in advance. This avoids seeking a match via the internet, which would have sapped the battery more quickly.

One of the new handsets was also demoed auto-translating a conversation between an English speaker and a Swedish speaker wearing the Pixel Buds to create a more seamless experience than is normal when using the firm's Translate app,

The new phones are between 4% to 11% more expensive than their predecessors in the UK, depending on the configuration.

"The challenge for Google is that if it starts prioritising new features and capabilities on its devices, it risks antagonising very important partners like Samsung," commented Ben Wood from CCS Insight.

"And what is more important to the greater good of the Google empire? Is it the reach that Android has or is it Google's desire to have its own hardware platform?"

One thing you have to say about Google's hardware ambitions - it doesn't give up when sales disappoint.

The Daydream VR headset promised to be a big step forward in mobile virtual reality but you'll struggle to find anyone who has used one.

Google Home showcases the firm's AI skills but arrived a long time after Amazon's Echo and is still struggling to catch up.

The first Pixel had a great camera, won very positive reviews - and ended up with roughly 0.5% of global smartphone market share.

But now all three products are getting a refresh with Google making a bold statement about its ability to combine hardware and software to produce a great user experience - rather like that other little tech company with its range of very profitable iDevices.

It's the Pixel 2 that is now Google's flagship device, boasting features which the firm says you won't yet see on other Android smartphones.

Sundar Pichai repeated his message about an AI-first world, and a new era where we interact more naturally with our devices. One example combines both - the squeeze feature which brings up the Google Assistant on your Pixel.

He believes his engineers lead the world in machine learning and that should translate into leadership in machines too.

Maybe - but first of all his company needs to up its game in two other key areas: marketing and manufacturing. It's all very well building a smartphone that gets five star reviews but if you can't make enough to meet demand you aren't going to get very far.

Google also unveiled other products at its launch including a smaller version of its Home smart speaker, and a larger edition designed for high-quality music playback.

The Home Mini will cost $49 and accepts tap-based commands as well as responding to voices.

The $399 Home Max - which contains two subwoofers for superior bass - uses artificial intelligence software to take account of where it has been placed in a room and adjusts its sound balance to suit.

The Max is likely to compete with speakers from Sonos - which had announced hours earlier that it would add Google Assistant to its latest speaker in 2018.

One expert said the Mini might appeal to those wanting multiple smart speakers in their home, as well as price-conscious under-25s.

"Google has been on the back foot at competing with Amazon," said Adam Simon from the consultancy Context.

"The Home came after Amazon's Echo, it didn't have the same range of smart home partners or types of device available and now Google is trying to catch up."

Perhaps the biggest surprise of the event was Google Clips, a small standalone camera that uses machine learning to recognise interesting scenes and familiar faces to record.

The device is designed to be clipped to clothes or other objects and only sends the videos and photos to a smartphone when commanded.

GoPro's stock tumbled when it was unveiled, but consumers may struggle to understand the need for the $249 gadget.

A new high-end Chrome OS-based laptop called the Pixelbook was also unveiled, which has the Google Assistant built in, an optional stylus, and can run Android apps.