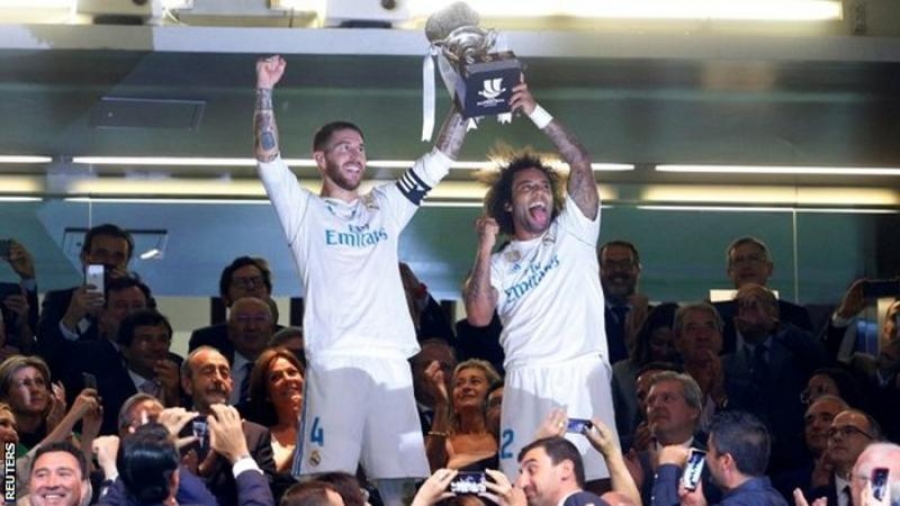 Real Madrid beat Barcelona 2-0 at the Bernabeu to win the Spanish Super Cup 5-1 on aggregate.

The Spanish and European champions were dominant, even without the suspended Cristiano Ronaldo.

Marco Asensio, who also scored in the 3-1 first-leg win, gave them an early lead with an excellent 25-yard strike.

And Karim Benzema flicked up Marcelo's cross and turned defender Samuel Umtiti to fire home a second with Barcelona rarely looking like coming back.

Real eased off in the second half, with the cup practically wrapped up, and Barca improved slightly as a result, with Lionel Messi and Luis Suarez hitting the woodwork.

In less than two years in charge, Zinedine Zidane has led Real to two Champions Leagues, and the 2016-17 La Liga title. And on this performance, they are going to be hard to beat again.

The big story before the game was Ronaldo claiming he was persecutedafter being banned for five games - for pushing the referee - after being sent off in the first leg.

Watching from the stands, he was not missed on the pitch, with Zidane also able to leave Isco and Gareth Bale on the bench with Sunday's La Liga opener against Valencia in mind.

But in 21-year-old attacking midfielder Asensio, they have one of Europe's most talented youngsters, and four minutes in, he fired home an excellent shot that left Marc-Andre ter Stegen rooted to the spot.

Benzema added a second with a great two-touch goal, and Real could slow things down after the break, knowing Barcelona did not look capable of scoring four unanswered goals.

Barcelona boss Ernesto Valverde will be worried by what he has seen in his two competitive games in charge, having replaced Luis Enrique in the summer.

Having lost Neymar to Paris St-Germain for £200m in the summer, and with their moves for Liverpool's Philippe Coutinho and Borussia Dortmund's Ousmane Dembele unsuccessful so far, they lacked the quality of Barca teams of the past.

With captain Andres Iniesta - now 33 - injured, Messi and Suarez both 30, and Suarez appearing to carry an injury for the final 10 minutes at the Bernabeu, Valverde has some serious problems to address just weeks into the job.

They were slightly better after the break - arguably because Real let them be - and Messi hit the bar after gliding past several defenders, with Suarez smashing the post with a header after Messi's shot was parried.

Barca get their league campaign under way on Sunday at home to Real Betis.