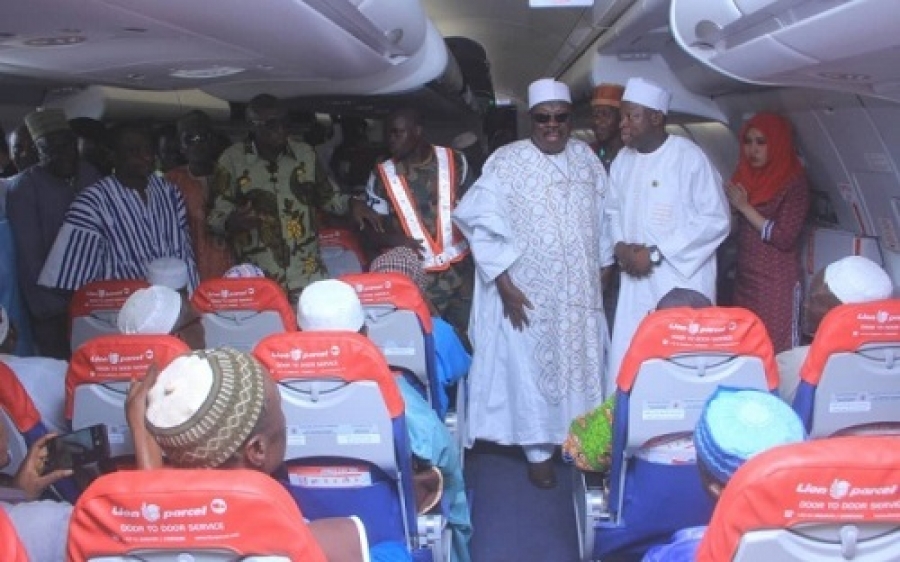 The first batch of Ghanaian pilgrims have returned to Accra after partaking in this year's Hajj in the Kingdom of Saudi Arabia.

The Flynas Boeing 747-400 Flight 7150 which carried the 472 pilgrims from Jeddah touched down at 2.55am Sunday dawn at the Kotoka International Airport.

The visibly exhausted but excited pilgrims then proceeded to the Immigration Area of the airport and later proceeded to another queue to retrieve their hand luggage and a box of holy water sourced from the Zamzam Well which is located within the Masjid al-Haram in Mecca, Saudi Arabia.Welcome

He said, "We thank you so much for the love and cooperation that you have exhibited throughout the process of this year's Hajj. As the Head of the Nasara just spoke, I think this year’s Hajj has been an improvement over 2016 and 2017 and hopefully next year and by the Grace of Allah, we shall succeed to the expectation of every Ghanaian.

"I want to use this opportunity to thank the government as well as the Vice President Dr Mahamudu Bawumia and our President Nana Addo Dankwa Akufo-Addo for the excellent work they have done for us. We pray that the blessings our pilgrims will be extended to them and all Ghanaians".

Briefing the Daily Graphic about when the remaining pilgrims were expected in the country, the Deputy Communications Director of the Hajj Board, Hajiya Mariam Sissy said the last of the 6,000 pilgrims will arrive in the country on Thursday, September 5, 2019.

Hajiya Sissy said, "Every pilgrim would go home with their two pieces of luggage but we are just holding them here because it is dawn and for security reasons, we have been advised that we shouldn't let them leave the premises but they would be allowed to leave at 6 am for their respective homes.

She also disclosed that aside from the death of a male Ghanaian pilgrim in Saudi Arabia and a female septuagenarian who was spotted receiving some medical care at the Hajj village upon arrival, the rest of the pilgrims including in good health.

"It's one of the aged as part of this flight, she is one Mariam Alhassan and she said she's about seventy and the thing is that she could not use the stairs, so they had to help her come down. So, she's currently in one of the tents resting".

"We had reports from our medical team that we had one man whom I would say, unfortunately, we lost him in Mecca. He's a resident of Kumasi but I would like to withhold his name for now but he has been buried and the Hajj Board has gone through the burial process in Mecca and his family has been duly informed about what happened," she revealed.

She said the next batch of pilgrims would arrive at 9 pm on August 1.

Some pilgrims who spoke to the Daily Graphic said the pilgrimage was incident-free and a massive improvement on previous years.

A pilgrim who gave her name as Hagee Humu Dilley Saeed said she was grateful to God as well as President Akufo-Addo and the Hajj Board for facilitating the journey and adequate accommodation.

"The arrangement was on point. The food and accommodation was better compared to some African countries whose nationals had to sleep outside. Let us put politics aside when it comes to Hajj because this was a great pilgrimage," she said.

A total of 6,000 pilgrims were successfully flown from Ghana to Saudi Arabia to perform the Hajj rituals.

Hajj is an annual pilgrimage to the Holy city of Mecca where Muslims perform various rituals as part of an Islamic obligation.

It is the fifth pillar of Islam, which enjoins every Muslim who can afford, and is physically fit, to embark on the pilgrimage, at least once in their lifetime.

Each year, millions of Muslims from all parts of the world converge on Saudi Arabia to praise Allah, express appreciation to Him for His mercies and also seek blessings and forgiveness for their trespasses as part of the rituals.