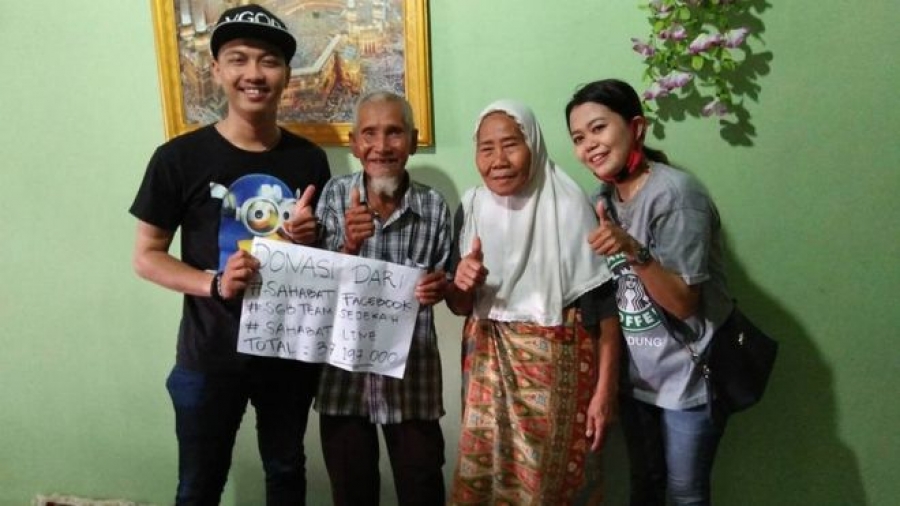 Netizens in Indonesia have rallied together in support of an elderly banana seller who said he was robbed of more than 1m rupiah ($80; £62).

Suratman, 94, said he was approached by a driver and asked to enter a vehicle to sell his fruit.

When inside, two men forced Mr Suratman to empty his pockets. They kicked him out afterwards and drove away, he said.

Tommy Reza posted a video online of a distressed Mr Suratman, which has since drawn sympathy and donations.

In the post, Mr Reza said Mr Suratman told him he was planning to use the stolen money to buy new furniture in celebration of the Eid al-Fitr festival later this month.

The incident happened in the province of Jambi on Sumatra island. Tommy Reza told BBC News that he came across Mr Suratman in tears.

"I just happened to be in the area when I saw a man shouting for help," he said.

Mr Reza told his story on Facebook and friends started getting in touch to help. That's when he decided to start a fundraising collection to get Mr Suratman his money back.

"Many people from Jambi and even overseas from places like Hong Kong and Malaysia got in touch to ask me where they could donate money," he said.

Many people also posted comments about their outrage and anger at the incident.

"This is disgusting on so many levels," wrote Calista Primalia on Facebook.

"First, it says a lot about you if you pick on an old man who is just trying to earn a living. And to think anyone would have the heart to carry out such an ugly deed during fasting month. Shame on them all."

Angie Kuron, who watched the video, said: "I cried because of the unfairness of it all. Is this what our country has been reduced to? I hope that the authorities will catch these crooks soon."

Since the viral post, more than 37m rupiah has been raised for Mr Suratman. The local governor later also donated 5m rupiah and bought his remaining banana stock.

Mr Reza posted pictures of himself delivering the money to the family.

"He was very grateful and he was praying. I told him that I was only the messenger," Mr Reza said.

"Indonesians are amazing. I'm touched by their compassion towards one another."